Climate Change has “firmly moved into the present” 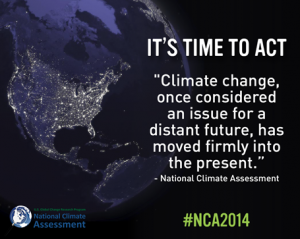 All right, everybody stay calm. We’ve learned (all over again) that not only is climate change real, it has “firmly moved into the present” and its impacts “are expected to become increasingly disruptive across the nation throughout this century and beyond.”

That’s according to the U.S. National Climate Assessment, a report five years in the making released today that details the observed and projected impacts of climate change in the United States.

“Evidence for climate change abounds, from the top of the atmosphere to the depths of the oceans,” the report’s overview reads. “Scientists and engineers from around the world have meticulously collected this evidence, using satellites and networks of weather balloons, thermometers, buoys and other observing systems. Evidence of climate change is also visible in the observed and measured changes in location and behavior of species and functioning of ecosystems.”

What’s that? You’re not living in the den of denial that still refutes the overwhelming consensus that we as a nation have to get serious about climate change? Well read on anyway, the report may be dense but it has some startling regional and state-level analyses too, you know, for when the reality of climate change just seems too big to grapple with.

Take the Southeast, a part of the country that includes many Appalachian states and thousands of miles of coastlines. According to the assessment, significant sea-level rise, extreme heat and water shortages all threaten the Southeast, a region that more than 80 million people call home.

The authors also note that the Southeast is not only a “major energy producer” of coal, crude oil, and natural gas, it is also the highest energy user of any of the National Climate Assessment regions.

Plenty of other discomforts, and downright disasters, will likely result across the country from continued inaction. Among them are reduced crop and livestock productivity in the Midwest, deluges and freezing temperatures in the Northeast, wildfires in the west, and an increase in disease-causing air pollution inland and along the coasts.

Overall, according to the assessment, U.S. temperatures have warmed between 1.3 and 1.9 degrees since 1895, with most of the increase since 1970, and the period from 2001-2012 was the warmest on record globally. 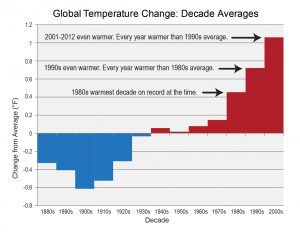 From the report: “Bars show the difference between each decade’s average temperature and the overall average for 1901-2000.” Click to enlarge. (U.S. Global Change Research Program)

The report also lays out the costs of climate disruption across sectors of the U.S. economy. The report places a particular importance on rural communities, like so many in Central and Southern Appalachia, because of their reliance on natural systems, and the fact that they provide the resources — food, energy, water, places to recreate, our national character and culture — that the rest of the America depends on.

In fact, the breakdown of the widespread and interconnected impacts of climate change is partially why the assessment should be a game changer: it provides local and state governments starting points and supporting evidence for swift action and adaptation.

“We’re pleased that the Obama administration and the scientific community as a whole takes the threat of climate change seriously, a fact made even more evident by today’s comprehensive assessment,” Appalachian Voices Executive Director Tom Cormons said. “But to rise to the challenge at hand, state and federal legislators in Appalachia and the Southeast must join the administration in finding ways to reduce greenhouse gas emissions and rethink the ways we power our economy.”

You can browse the entire report here, but that’s the gist of it: climate change is happening predominantly due to burning fossil fuels, it’s making the hottest days hotter and the most destructive storms even more destructive, and it’s basically living up to its reputation as the greatest moral, environmental and economic challenge of our time, or any time.

For a look at what we’re already doing to combat climate change, check out this overview of President Obama’s climate action plan.

Let’s hope this latest reminder of the harsh reality and global implications of a warming planet converts more than a few climate deniers. If a congressionally-mandated assessment produced by a team of more than 300 experts, guided by a 60-member advisory Committee and extensively reviewed by the public, federal agencies and a panel of the National Academy of Sciences isn’t enough, well, we’re kind of running short on time.

The multi-billion dollar denial machine has been mysteriously, pleasantly, quiet on the climate assessment. But when the fossil-funded lackeys take to whatever “balanced” coverage cable news sees fit for this objectively important report, you have our permission to plug your ears.