McAuliffe can pave the way for a cleaner future for Virginia

{ Editor’s Note }This post ran as an op-ed in the Richmond Times-Dispatch on Tuesday, April 8 — the first day of the annual Environment Virginia Symposium, an environmental conference that brings together regulators, business people and entrepreneurs, elected officials, and citizen groups like Appalachian Voices.

In his keynote speech at the symposium, Gov. Terry McAuliffe said he plans to diversify Virginia’s economy by boosting the clean energy sector, which would not only create jobs but also address climate change: “I believe humans contribute to climate change. I think it’s pretty much settled. I think the impacts are felt today.” 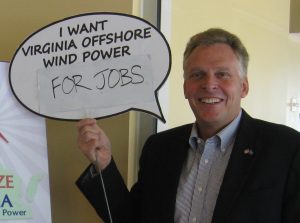 In his keynote address at the Environment Virginia Symposium, Gov. Terry McAuliffe said he plans to diversify Virginia’s economy by boosting the clean energy sector.

In almost every campaign speech, Terry McAuliffe told the story of how he started a driveway-paving business in his neighborhood when he was 14 to earn money to help pay for his college education. Now Virginia’s 47th governor, McAuliffe is clearly proud of the moral: Work hard, invest in your future and you’ll go far.

As Gov. McAuliffe begins to apply these values to his gubernatorial agenda, there’s no better place to start than by paving the way for a stronger, more equitable economy for all Virginians by investing in a 21st-century clean-energy sector for the commonwealth.

Wind and solar power and energy efficiency have not only proven to be cost-effective, they can provide long-term jobs throughout the state, stabilize energy costs for families and businesses and strengthen Virginia’s economy. As a first step, McAuliffe should require that all state-owned buildings in Virginia derive at least 20 percent of their power from renewable energy sources, and direct his agencies to become 20 percent more energy efficient.

McAuliffe has numerous other options at his disposal to put forth a clear vision for clean energy and take concrete steps to fortify the clean-energy business sector here in Virginia.

Increasing investments in energy efficiency programs could create nearly 10,000 jobs and save Virginians over $2.2 billion annually on their electric bills by 2025.* But Virginia is far from realizing this opportunity; in fact, we rank 36th nationally for energy efficiency.

Seven years ago, the General Assembly set a voluntary goal to cut energy use by a modest 10 percent by 2022 (from 2006 levels). The state’s two largest electric utilities, Dominion Virginia Power and Appalachian Power, are on track to meet just one-half and one-quarter of that goal, respectively. McAuliffe should press the utilities to invest in more ambitious energy-efficiency programs to benefit the economy, the public and the environment. He should also adopt improved statewide building code standards that could increase efficiency of new home construction by as much as 27 percent.

The solar industry is booming across the country — except in Virginia. Last year, the industry added 14,000 new jobs, while fossil fuel companies cut nearly 4,000 workers. North Carolina has installed enough solar to power more than 25,000 homes and is ranked third for solar installed in 2013 — much of which powers data centers. Virginia trails far behind, with not even enough solar to power 1,000 homes.

Virginia could catch up, or even surpass our neighbors. McAuliffe can jumpstart solar projects by discouraging penalties imposed by utilities on homeowners and businesses who install solar panels, and by supporting policies that allow all Virginians to easily finance solar installations on their homes and businesses.

Virginia has some of the strongest potential for offshore wind energy in the country and holds the first federal license in the mid-Atlantic region, with the potential to produce enough electricity to power 700,000 homes. Dominion holds the lease, but is currently planning to develop just a fraction of that potential, enough to power roughly 4,200 homes, by 2028. McAuliffe should urge Dominion to fully develop this resource, which could create 10,000 additional new jobs over the next 20 years.

McAuliffe should take immediate and significant action to expand and diversify economic opportunities in Southwest Virginia, especially in communities where coal is mined. Investments in clean energy, tourism, education and manufacturing will help secure a stronger economic future for families that have unfairly suffered poisoned drinking water and streams, soot and dust in the air, severe health problems and other impacts of mountaintop-removal coal mining.

McAuliffe can lead Virginia toward a stronger, healthier, economically just future by championing positive clean-energy policies like these. Our organizations stand ready to work with the governor, his staff and administration to help make that happen.
As a boy, Terry McAuliffe aimed high when he started his first business to invest in his future. He should do the same now for Virginia.

* Information for this article was drawn largely from an August 2013 report, “Changing Course: A Clean Energy Investment Plan for Dominion Virginia Power, by the Institute for Energy Economics and Financial Analysis and Optimal Energy.