Fouling Our Nest: Coal Ash Roundup and Next Steps 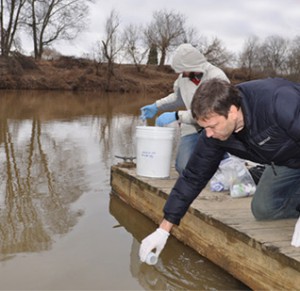 More than a month after the Dan River spill more of Duke Energy’s rogue policies related to coal ash are coming to light. Above, Appalachian Voices’ Matt Wasson collects water samples from the Dan River

We’ve seen national interest in North Carolina’s coal ash mess grow over the past month and a half, and it’s been a wild ride.

The Dan River coal ash spill on Feb. 2 sparked a wave of support for closing the 33 ash ponds owned by Duke Energy polluting North Carolina’s surface and ground waters. We’ve got a complete history of developments on this page. Here are the most recent developments:

Amy Adams, our N.C. Campaign Coordinator, participated in an outstanding News & Observer editorial interview and a community informational panel last week in Durham. She was joined by John Dorney and George Matthis, long-time employees of the N.C. Department of Environment and Natural Resources who have since retired and began speaking out against the political breakdown of the agency. The N&O interview provides the most comprehensive insight into how Gov. McCrory and his administration have degraded the agency responsible for protecting the air, land, and water we all depend on. Amy explains the threat and what’s at stake:

“No one should have to open their tap and turn on water and wonder whether this is going to kill me in 30 years. It’s called sub-lethal chronic exposure … It’s scary how many folks have cancer, multiple miscarriages, neurological issues. The watchdog that’s supposed to be in charge of that basically is a lap dog. They’re not going after the folks they need to be going after in order to protect the health of North Carolinians.”

Amid the political upheaval over coal ash regulation, we’re seeing widespread public support for Duke Energy to clean up all of the North Carolina coal ash ponds and pay for the process. 83 percent of citizens polled say they want Duke to move and store the utility’s coal ash in dry landfills and 93 percent support the state government in enforcing that demand. Surely public outcry against Duke’s blatant disregard for protecting clean water will increase over time as more aspects of the utility’s rogue maintenance policies are uncovered, including how it is pumping toxic water from coal ash ponds into the Cape Fear River.

When it comes to paying for proper ash storage in lined landfills, 79 percent of citizens agree that Duke must pay for it, not taxpayers. We couldn’t agree more. N.C. Attorney General Roy Cooper says that “Duke Energy should clean up the coal ash at its own expense, and we will fight for consumers if the company tries to charge them.”

Lastly, the grand jury proceedings begin today, March 18, and will continue until all persons filed with subpoenas have been questioned. We’ll watch what comes out of the federal criminal investigation and how it influences the ever-developing argument to stop coal ash pollution in North Carolina and the U.S.