It’s Solar Day, So Why is Duke Energy So Sour? 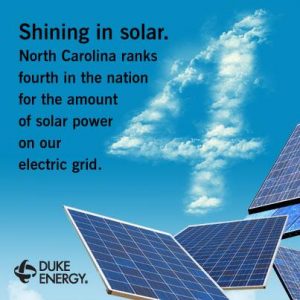 Duke Energy celebrates the strength of North Carolina’s solar industry while threatening to slow it down.

Before my Facebook feed lit up with support for solar power this morning I thought it was just Friday, and that was good enough. I quickly realized though, that this bright — albeit blisteringly cold — Friday has been dubbed “Solar Day” by the Solar Energy Industries Association.

Today, SEIA launched its America Supports Solar website, which has some dazzling infographics to outweigh its cliches — “grab your sunglasses!” Indeed, there is plenty to celebrate about solar energy in the United States today. It’s one of the fastest growing industries in the country, employing 120,000 worker, and today, solar power has an installed capacity of 13 gigawatts, enough to power more than 2 million homes.

Just ask Paul Newton, the president of North Carolina utility operations for Duke Energy, the largest power company in the U.S., what he thinks of solar energy.

“I think it’s time to take a look at it before it becomes a huge issue in North Carolina,” Newton told the News & Observer. Wait, what? Somebody get this guy some sunglasses.

Last year, North Carolina was second in the nation in solar growth, behind only California. With a boost from the state’s renewable energy portfolio passed in 2007, North Carolina’s solar sector has grown into a billion dollar industry that employs 1,400 people. Overall, the state ranks fourth in installed capacity. Even Duke Energy, which basically has a monopoly on power services in North Carolina, recently celebrated that shining stat.

Unfortunately, the solar industry might in North Carolina might be growing to quickly for big daddy Duke Energy to keep in check. As the News & Observer and other sources are reporting, Duke wants to reduce the value of the renewable energy credits North Carolina households that have installed rooftop solar receive for generating electricity that is fed into the grid — a practice known as “net metering.” Here’s how the N&O describes Duke’s predicament:

“Under existing policy, households and businesses with “net metering” contracts are paid the full retail price for electricity they send out to the grid – about 11 cents a kilowatt hour – which is the same amount households pay for electricity from Duke and Progress. Federal law, however, requires that solar power producers be paid only the cost electric utilities avoid incurring by not generating their own power, which is less than 7 cents a kilowatt hour in North Carolina.”

Jason Keyes, a lawyer specializing in renewables, told the N&O that small solar producers deserve to receive credits worth the full cost of electricity – between 10 and 11 cents per kilowatt hour in North Carolina – because unlike utility-scale solar farms, homes and businesses are connected to the power grid and don’t require multimillion-dollar extensions of transmission lines.

As the role of small-scale distributed generation like rooftop solar grows, so does the fraught relationship between utilities like Duke Energy and homeowners and businesses that want to produce their own electricity. But traditional utilities like Duke are already motivated and taking steps toward the distribution edge — where customers, power providers and distributed energy resources meet.

In an issue of The Appalachian Voice last year, we pondered whether utilities would use their power to lead, or try to stall and eventually find that they have been forced to follow. We’re still waiting to see.