Will West Virginia Politicians Hit “Snooze” on Another Wake-Up Call?

Jonathan, a paddler who grew up in the New River Valley of West Virginia, served as the Appalachian Voices Director of Development from 2013 to 2016. 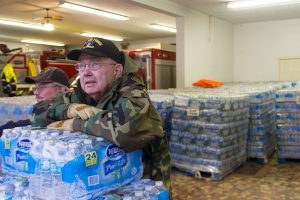 The crisis in West Virginia that left 300,000 without safe water is far from the first wake-up call policymakers and regulators have had. Hopefully they won’t hit “snooze” this time. Photo by Foo Conner, @iwasaround

Driving into Charleston, W.Va., last Friday with a load of potable water for some family members, my wife and I immediately noticed the odor we read about that was compared to licorice. It hadn’t hit me until then that we were in a federal disaster area; fortunately no one has died from the chemical spill, yet the lives of some 300,000 people were systematically affected by it.

Over the weekend, boiling rainwater, washing clothes in the sink and carrying pans in and out of the house reminded me of what my great-grandmother did all her life. I could tolerate this for a while if necessary. But what about people unable to leave their homes or without the means to obtain water? How would they find help? How would they make it through this disaster?

I wish I could believe that last week’s spill in Charleston will result in a timely overhaul of regulations preventing anything like this from ever happening again, but I know better. As a native West Virginian and 40-year resident of the Mountain State, I don’t have much faith that the inalienable rights citizens have to clean water and clean air will be prioritized over money that’s to be made.

I remember hearing and feeling the explosion nearly five years ago at the Bayer CropScience plant in neighboring Institute, W.Va. Scarier to me than the explosion itself was learning that large shrapnel had landed near the MIC (methyl isocyanate) tank and how incredibly close we came to a catastrophe like the one in Bhopal, India that killed thousands of people 29 years ago. I presumed this accident would certainly result in improved safety and greater oversight.

But as Ken Ward, Jr. of the Charleston Gazette has reported, it apparently didn’t. The state’s Department of Health and Human Resources and the Department of Environmental Protection chose to not establish a safety and oversight program similar to the one recommended twice by the U.S. Chemical Safety Board. Such a program with greater regulation—local, state, or federal—of chemical storage could have helped prevent this most recent chemical spill.

To West Virginia’s state and federal leadership, “regulation” is a four-letter word. They fight tooth-and-nail against new legislation and enforcement of existing laws that protect our air, water and health because the earnings of companies bankrolling their political careers might be affected. They deem proper oversight as a barrier to the status quo keeping them in office. Entranced by the power of the coal and chemical industries, they neglect their solemn obligation to protect their constituents from hazardous materials, waste and emissions.

How many wake-up calls do West Virginia’s elected leaders get?

Jonathan Harvey is Appalachian Voices’ director of development. He joined our staff last fall, moving from Charleston, W.Va., to our Charlottesville, Va., office.