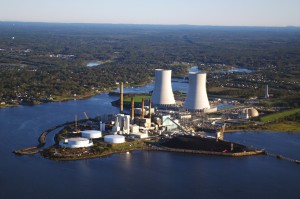 This week, Brayton Point, New England’s largest coal plant and a purchaser of Appalachian coal, was announced for retirement.

The Brayton Point Power Station, a 1,600-megawatt power plant in Massachusetts and New England’s largest coal-burning facility, has been in operation for nearly 50 years. But recently it started to seem like no one wanted to be responsible for the aging plant. Yesterday, the plant’s owner announced plans to retire Brayton Point by May 2017.

Energy Capital Partners, a private equity firm and the current owner of Brayton Point, said a number of factors contributed to the planned shutdown, including low electricity prices, a surplus of natural gas, and the need to invest “significant capital to meet environmental regulations and to operate and maintain an aging plant.”

Some of the coal burned at Brayton comes from Central Appalachia. In addition to challenges facing the Appalachian coal industry closer to home, plans for more power plant retirements across the country are another hit for regional producers who count on coal-burning utilities as customers.

Virginia-based Dominion Resources owned Brayton Point before it was officially sold to Energy Capital Partners in August. According to Dominion’s website, the company’s investments in retrofits to the plant totaled approximately $1.1 billion between its acquisition from Pacific Gas & Electric in January 2005 and its sale this year.

The investment to prolong Brayton Point’s lifespan, and the fact that Dominion was even able to sell the plant just a few months ago, is what makes this retirement different from other outdated coal plant closures. Despite Dominion’s efforts to modernize the plant, a 2012 report by USB Investment Research projected Brayton Point would lose $3 million in 2014.

“Brayton Point is the largest and most modern coal-fired power plant in New England. If they can’t make a go of it, none of them can,” Peress said in a joint press statement. “This is a death knell for coal in the region.”

According to the Providence Journal, Brayton Point had once been valued at a half-billion dollars. But when Energy Capital Partners paid Dominion $650 million earlier this year, it was for Brayton Point and two power plants in Illinois.

With just six coal-fired power plants, New England is seen as a leader in a national movement away from coal. Just 3 percent of electricity in the region comes from coal compared to 52 percent for natural gas, according to the U.S. Energy Information Administration. In 2011, Dominion asked permission to shut down the Salem Harbor Power Station, also in Massachusetts. Instead, the plant is being converted to natural gas.

But coal’s minor role in the Northeast does not reflect its enduring significance as an energy source nationwide. In 2012, coal accounted for 36 percent of all power produced in the country, according to the EIA. And coal’s share of electricity generation can reach 85 percent or higher in southeastern and Appalachian states.

According to the Clean Air Task Force, coal plants currently planned for retirement will help to save 4,000 lives every year, and prevent 6,200 heart attacks and 66,300 asthma attacks. Retiring these plants will also avoid $1.9 billion in health costs.

A press release from the Sierra Club marked Brayton Point as the 150th coal plant retirement announced since 2010, calling the news “a significant milestone in the ongoing campaign to move the country beyond coal no later than 2030.”