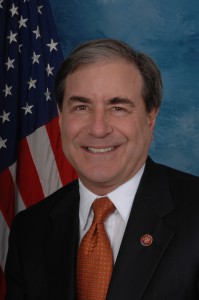 A champion in the fight to end mountaintop removal, Kentucky Congressman John Yarmuth is joining the powerful House Committee on Energy and Commerce.

Kentucky Congressman John Yarmuth joined the powerful House Committee on Energy and Commerce this week, putting him in the middle of debates concerning environmental and energy policy.

The committee will also oversee the implementation of the Affordable Care Act. Yarmuth voted for Obamacare, and has been its lone defender in Kentucky’s federal delegation.

Yarmuth is filling the vacancy on the committee left by former Congressman Ed Markey of Massachusetts, who was recently elected to the U.S. Senate.

The panel’s ranking Democratic member, California Rep. Henry Waxman, proposed that Yarmuth serve on Energy and Power Subcommittee, the Oversight and Investigations Subcommittee, and the Commerce, Manufacturing and Trade Subcommittee.

For years, Yarmuth has been a leader in the fight to end mountaintop removal coal mining. And as a Democrat from an Appalachian coal-mining state his voice is especially meaningful. Yarmuth has been a primary sponsor of the Clean Water Protection Act in previous sessions of congress and is currently a cosponsor on the bill.

In February, he introduced the Appalachian Community Health Emergency Act, a bill to place a moratorium on new mountaintop removal permits until the Department of Health and Human Services decides that the practice does not present any health risks to nearby communities.

“Congressman Yarmuth’s leadership has earned him the respect of colleagues and the trust of his constituents,” House Minority Leader Nancy Pelosi (D-Calif.) said in a statement. “From stopping mountaintop removal mining in Kentucky to leading the charge to implement the Affordable Care Act, from advocating for advanced manufacturing in Louisville to building a sustainable future nationwide, he brings an unyielding determination to the task of protecting America’s environment, securing affordable health care for all, and promoting the clean energy jobs of tomorrow.”

Appalachian Voices congratulates Congressman Yarmuth on his appointment and we’re grateful for his leadership in the movement to end mountaintop removal.