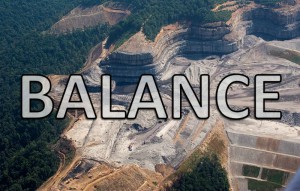 Lie 1 of 5: Balance. According to some in Congress, supporting mountaintop removal is the same as advocating for a balance between the environment and the economy.

After spending a month back in their home states, Congress is back in session. Between the budget, the debt ceiling, Syria, energy efficiency bills, and the farm bill, they have plenty of work to do in a short period of time but rest assured the dialogue on Capitol Hill will contain the same old mix of logic and utter nonsense.

There are ethical and committed people working in Congress, both members and staff, but their work is often stifled by clever politicians catering to special interests and major donors. On every environmental issue under the sun, polluters and their allies are prone to misleading the public. Over the next two weeks, we’ll refute the five biggest, baddest lies about mountaintop removal coal mining.

1. When it comes to mountaintop removal, we need to strike a “balance” between the economy and the environment

Since arriving in Washington, D.C., six years ago and watching more Congressional hearings than I can count, one of the cliches that gets under my skin the most are the constant cries that we need a balance between the economy and the environment.

Senator Joe Manchin (D-WV) is obnoxiously fond of the phrase. Here are just a few of the numerous times he’s used his favorite talking point.

— “There’s a balance to be had, the economy and the environment has to work together …” [1]

— “There is a balance to be had between our economy and our environment and West Virginia is leading the way in finding that balance.” [3]

— “There’s a balance to be found between the environment and the Economy and the EPA has worked very hard to avoid finding that balance.” [4]

The phrase is a lie not only because it’s entirely incorrect, but because the politicians who say it do not actually mean it. What they really mean is “stop regulating the coal industry polluters.” Politicians who advocate for mountaintop removal mining rarely attempt to explain how the devastating practice could possibly be considered a balance between the economy and the environment. That’s because they can’t.

At what point is mountaintop removal mining doing anything to add weight to the environmental side of this “balance?” Is it the deforestation? The destruction of habitat? The demolition of ancient Appalachian mountains? The dumping of mining waste laden with toxic heavy metals into streams?

You don’t need to read the dozens of health studies to know that mountaintop removal coal mining is an environmental catastrophe.

Though a healthy environment is necessary for a healthy economy, Appalachian Voices has always advocated for such a balance by acknowledging the importance of traditional underground coal mining to the region while transitioning to a sustainable, clean energy future. Matt Wasson, our Director of Programs, made our position clear before Congress during a hearing last year.

“I recognize that America needs coal to power our homes, factories and economy. Moreover, we will continue to rely on the hard work and sacrifice of American miners to supply coal for years, perhaps decades, into the future. While demand for coal is in long-term decline due to competition from other energy sources, there is no immediate alternative that can replace the 42 percent of our electricity and 20 percent of our overall energy supply that coal currently provides.

The best way to ensure a reliable supply of coal, as well as to honor the men and women that mine it, is to give agencies the authority and resources they need to ensure coal is mined in a manner that does not destroy the land, water and health of nearby residents and that clearly complies with laws passed by Congress to protect our natural resources.”

Mountaintop removal mining makes a true balance between the economy and the environment impossible. And the practice should have no place in America’s energy future.

Supporters of the devastating practice mislead Americans, and impacted communities most of all, by suggesting that blowing up mountains for coal is beneficial to jobs and the regional economy. It is not, and I’ll discuss why in the next installment.