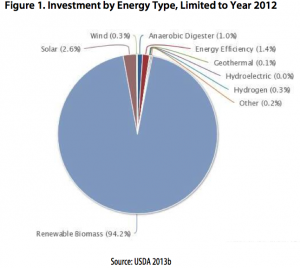 Only a sliver of the USDA Energy Investment Pie goes to energy efficiency project. Rural communities nationwide could benefit from even a slightly more balanced approach.

Over the summer we watched closely and shared our take on the importance of energy programs in the 2013 Farm Bill. You may remember that the Senate ultimately passed a version that included budget cuts but was in line with previous bills and budget constraints.

Not one to be outdone, the House went on to narrowly pass a version that completely eliminated the section on funding for food stamps — the first time it had been left out of the bill since 1973.

Fortunately, there is a bright spot. The American Council for an Energy-Efficient Economy believes that energy efficiency programs in the farm bill are something that both Democrats and Republicans can agree on. Despite major and perhaps irreconcilable differences, several key energy programs have remained intact and have bipartisan support.

A report released this month by the ACEEE titled “Energy Efficiency Opportunities at the USDA” surveys the potential for efficiency as a money saver and job creator in rural America. According to the U.S. Census Bureau, around 20 percent of the population lives in rural areas. But in Appalachia, the portion of the rural population is double the national average according to the Appalachian Regional Commission.

In Appalachia and other less populated areas, energy is an essential component of efforts to support economic stability. The USDA provides a significant amount of funding to energy projects nationwide, including biofuels, wind power and energy efficiency. But in 2012, efficiency only accounted for about 1.4 percent of energy investments made by the department, whereas investments in biofuels like ethanol made up about 94 percent.

According to the ACEEE, even small investments in energy efficiency can reduce expenditures on electricity and fuel that will benefit cash-strapped farmers and rural businesses and homeowners who face the challenges associated with being located in low population density areas. Considering Congress’s cutting costs and the consequences of the sequester, the ACEEE believes resources would be more effectively spent if funding dedicated to energy efficiency is increased and the proportion of funds dedicated to biofuels is cut.

Take the USDA’s flagship energy initiative, the Renewable Energy for America Program (REAP). From 2008, when the last farm bill was enacted, to 2012, REAP supported 7,600 projects that generated or saved more than seven billion kilowatt hours of electricity – enough to power 680,000 homes annually. Those projects created more than 18,000 new jobs. In the current farm bill, funding through REAP is available for energy audits, energy efficiency improvements to farm equipment, renewable energy projects and feasibility studies for other eligible projects.

Both the House and the Senate versions of the farm bill reduce funding for REAP. But the House version completely eliminates mandatory funds in favor of discretionary funding, which is not guaranteed to make it through the appropriations process. Should the final farm bill resemble the House version, the ACEEE claims that “Congress would be sacrificing cost-effective investment in efficiency with long-term benefits for short-term budget concerns.”

As a post today by Kate Zerrenner on Forbes.com points out, more controversial issues than energy efficiency, including food stamps and other farm subsidies, could threaten the reauthorization of cost-effective, successful energy efficiency programs like REAP. But as farming communities face rising energy costs and other challenges, it has never been more important to maintain and grow efficiency policies and programs in rural America.

Learn more about USDA energy investments in your community by checking out the department’s Energy Investment Report and click here to learn more about Appalachian Voices’ work to expand energy efficiency programs through rural electric cooperatives in our region.