Reform in the Wrong Direction – McCrory Signs HB 74 Into Law 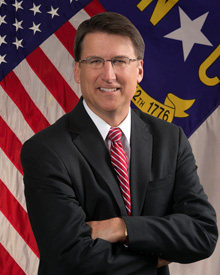 Want to make a lot of people unhappy quickly? Just ask North Carolina Governor Pat McCrory how. Over the weekend, he signed the controversial Regulatory Reform Act (HB 74) into law.

The 60-page bill, which McCrory calls “common sense legislation” like most of the other bad bills he has signed, contains dozens of provisions ranging from how close landfills can be built to state game lands, to how handlers transport venomous snakes, to how much polluters can contaminate groundwater before being forced to clean up their mess. Appalachian Voices and clean water advocates statewide are especially concerned with the way the new law relates to coal ash pollution.

Residents of western North Carolina and local governments should be particularly perturbed with the governor. The bill abolishes the Mountain Resource Commission, a volunteer advisory board that works to safeguard western North Carolina’s natural resources. And it blocks cities and counties from improving environmental and public health protections beyond state regulation until October 2014.

For a short time, this massive mistake seemed destined to a have the word “veto” stamped across it.

At a press conference after the legislative session concluded, McCrory expressed concern that sections of the bill would weakens standards that protect citizens, communities and gamelands from the impacts of reducing regulations on landfill size and location. At that conference, McCrory announced he was considering vetoing the bill. Ultimately, it was one of the last pieces of legislation he signed.

Among those pressuring him to veto the bill were the AFL-CIO Farm Labor Organizing Committee, who objected to the bill’s “harmful attacks on workers’ rights, environmental protections, and public health.” Scenic North Carolina dubbed the bill “Billboards Forever,” since it “encourages additional clear-cutting of the public’s trees” to expand billboard visibility and overrides local laws governing roadside advertising.

The most united and outspoken contingent against the bill has been the environmental community. Before HB 74 was passed, state legislators and the McCrory administration continuously heard from environmental groups statewide, including Appalachian Voices, the N.C. Coastal Federation, the Haw River Assembly, the N.C. Conservation Network, the Sierra Club and Waterkeepers North Carolina.

Separately and together, we educated citizens and warned lawmakers about the impacts HB 74 will have on the health of North Carolina’s waterways.

We’ve written about the ways this bill weakens water quality protections and the ability of regulators to enforce rules before. See here, and here. But here’s the short version: the largest polluters in the state are now allowed to contaminate groundwater up to their property line. This includes the unlined coal ash ponds that are contaminating the water of communities near coal plants. Not to mention, under the new law polluters are not required to remedy water pollution up water pollution until “an imminent hazard or threat to the environment, public health, or safety exists.” Yep, that’s in the bill.

We can’t be sure yet what this means for how coal-burning utilities, state agencies and the courts will address the threat of coal ash. It could be a way for Duke Energy to wriggle their way out of the recent lawsuits over coal ash pollution, or just another misguided policy that pits environmental regulation against job creation. Either way, North Carolina’s communities and economy will suffer for it.

Do you live in North Carolina and care about clean water? You’re not alone. Call McCrory’s office at 1-800-662-7952 or e-mail the governor here.