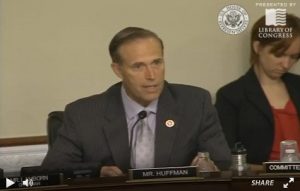 1 Pings/Trackbacks for "The Environment on The Hill: Congress Continues to Undermine Essential Protections"