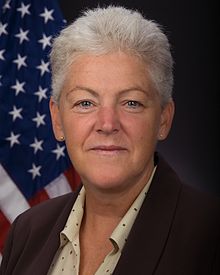 After more than five months of delay and threats of filibuster, the U.S. Senate today confirmed Gina McCarthy by a vote of 59-40 to head the U.S. Environmental Protection Agency. It was the longest delay of a presidential nominee’s confirmation in the agency’s history.

Under President Obama, the EPA has been vilified by the fossil fuel industry and its allies on Capitol Hill who seek to thwart regulations that protect the environment and public health. Since McCarthy’s nomination, anti-environmental forces have blocked her confirmation and compelled her to respond to a record 1,100 questions from senators.

McCarthy, who prior to today’s confirmation held the position of assistant administrator for the EPA’s Office of Air and Radiation, has worked in state and federal government for 25 years and has an established record of working across the aisle to protect the environment. As EPA administrator, she will have the task of implementing the Obama administration’s climate action plan, as well as finalizing several critical rule-makings to which the agency has committed.

“We congratulate Ms. McCarthy on her hard-won confirmation, which demonstrates her mettle in facing tough issues with graciousness and fortitude, qualities she will surely need in the months and years ahead.

“We are encouraged by Ms. McCarthy’s understanding of the impact on American families and communities from the air and water pollution that come from extracting and burning fossil fuels, and urge her to bring an end to one of the most destructive industrial practices occurring today—mountaintop removal coal mining in Appalachia.

“We look forward to working with her as she undertakes the central issue of our lifetime as framed by the president—reducing the country’s greenhouse gas pollution while also addressing the escalating impacts occurring right here in the U.S. from climate change.”