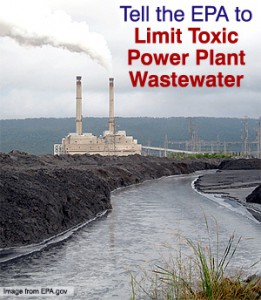 The last power plant discharge standards were introduced more than 30 years ago. On Tuesday, July 9, join us at a public hearing in Washington, D.C., to support the EPA and request that strict wastewater pollution limits replace the outdated rule.

Each year, coal-fired power plants dump 80,000 pounds of arsenic, 65,000 pounds of lead, and 3,000 pounds of mercury into U.S. waterways. More than 23,000 miles of America’s rivers have been sullied due to the lack of pollution standards for wastewater discharged from power plants.

On Tuesday, July 9, you can help fix this.

The U.S. Environmental Protection Agency will hold a hearing on the proposed Effluent Limitation Guidelines, a set of standards that would reduce the amount of power plant pollution dumped into U.S. waters by up to 5.6 billion pounds annually. Attendance at the July 9 hearing is critical because it is the only public hearing currently planned for the proposed pollution limits.

The Clean Water Act was passed in 1972 and the last power plant discharge standards were introduced ten years later in 1982. To put things into perspective: Michael Jackson’s song “Thriller” was also released in 1982. As a college student, I am glad that “Thriller” is a classic; it’s a catchy tune enjoyed by those of us born even decades after its release. I am not thrilled, however, by the fact that our current power plant wastewater discharge standards debuted the same year. Pollution standards should not become “classic.”

In a society where technology is updated constantly, I hope that we recognize the need to extensively update our 31-year-old wastewater standards. After all, we don’t need the latest iPhone to survive, but we do need clean water.

We need you!
Sign up to attend the EPA’s hearing on coal plant wastewater July 9.
Submit a Comment to the EPA
Can’t attend the hearing? Submit a comment electronically.

On July 9, dedicated folks from around the country will gather to support the EPA and request that strict wastewater pollution limits be put into effect to control the contaminants discharged from power plants. In doing so, the country will move one step closer to achieving the Clean Water Act’s goal of eliminating the release of toxins into our water.

Please join me and other clean water advocates from around the country on July 9. As Americans, we routinely see that the best way to create change is to voice the need for it. Let’s support the EPA in setting the strictest standards for wastewater disposal. As Obama said last Tuesday in his historic climate speech, “if we can come together and get this right, we can define a sustainable future.” See you on July 9th at 1:00 p.m.

Cant attend the hearing? Submit an electronic comment to the EPA here.