A Legislative Lesson in Taking the Easy Way Out 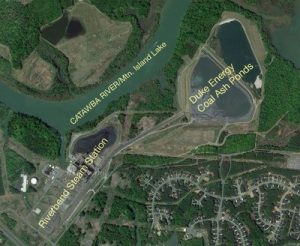 A North Carolina bill includes proposes allowing groundwater contamination up to a landowner’s property line, a plan supported by Duke Energy, which is being sued for coal ash pollution at its Riverbend Plant. Photo by the Catawba Riverkeeper.

In the midst of allegations against Duke Energy for coal ash pollution at multiple coal-fired plants, a bill in the North Carolina House of Representatives could give polluters a free pass and build a buffer against lawsuits.

Already passed by the N.C. Senate, the Regulatory Reform Act of 2013 (S 612) proposes a “boundary loophole” that would allow groundwater to be contaminated by toxic chemicals such as arsenic, selenium and mercury, as long as it remains inside the owner’s property line. That terrifying prospect is hardly assuaged by the sponsors’ claim that their beyond-polluter-friendly bill seeks to “provide regulatory relief to the citizens of North Carolina.”

If you’ve been paying attention to the recent exploits of the N.C. General Assembly, you’d assume that the bill goes beyond creating a boundary loophole. You’d be right. The entirely anti-environmental bill includes provisions to fast-track the permitting process for certain environmental permits and to prevent local environmental rules from being stricter than state or federal statutes or regulations.

The legislature already passed a reform bill forbidding new state rules from being more stringent than federal standards last year. Of course, like most of the ill-conceived crusades being waged in Raleigh, that’s easier said than done.

Not only would the bill destroy decades of environmental protection, critics say, the state’s patchwork of regulations cannot simply be compared to federal rules to determine whether they’re more stringent. And what works for protecting water from industrial and agricultural activities in western North Carolina may be different from what is needed in coastal communities.

“It’s not as easy as people seem to believe,” Robin W. Smith, a former assistant secretary at the state Department of Environment and Natural Resources, is reported as saying in the News & Observer after the bill passed the full Senate. “It’s just not that clear-cut – setting aside whether we really want to give up the state’s ability to shape a program to what the state needs.”

On the contrary, Senate Leader Phil Berger issued this predictable platitude: “North Carolina businesses have been choked by government red tape for far too long and need the freedom to operate efficiently in order to compete and create jobs.”

But back to that boundary loophole, which by most accounts was either created to appease Duke Energy or is an awfully convenient addition for the mega-utility considering its current coal ash quandaries.

“I characterize this bill as Duke trying to lobby its way out of trying to clean up its groundwater contamination,” DJ Gerken, senior attorney with the Southern Environmental Law Center, told the Asheville Citizen-Times. “The main point under the bill is that no polluter has to stop contamination of groundwater until after they have contaminated their neighbor’s property.”

Beyond the extension of boundaries to property lines, environmental advocates like French Broad Riverkeeper Hartwell Carson fear that Duke could simply buy neighboring properties, and that landowners would have a high incentive to sell, pushing the boundary even further.

After direct pressure from SELC and other groups, the N.C. Department of Environment and Natural Resources filed suit against Duke Energy for violating permit boundaries, putting the French Broad River at risk of coal ash pollution, oh and, operating a facility that “poses a serious danger to the health, safety and welfare of the people of the state of North Carolina and serious harm to the water resources of the state.”

“One thing this bill does is legislate around this lawsuit. No one has to clean up inside their boundaries,” Gerken told the Citizen-Times.

In May, the state added Duke Energy’s depression-era Riverbend Steam Station to the lawsuit to address coal ash pollution from the defunct facility. Even though Riverbend closed in April, two unlined coal ash ponds at the plant still threaten Mountain Island Lake, the drinking water source of more than 800,000 residents of the Charlotte Metro area.

Duke Energy’s attempts to address its pollution problems and reposition itself as a responsible corporate citizen have been pretty lackluster. As CEO Jim Rogers unconvincingly told Charlotte Magazine, “We’ll ultimately end up cleaning up all that.” All the while, the argument gets stronger that its appreciation for North Carolina’s waters only extends as far as its ability to use our rivers and lakes to dispose of waste.

Put simply, the one-size-fits-all reform bill shifts the focus from prevention to the inevitable cleanups and prefers imagined future problems to the reality of current ones. But don’t worry, N.C. Senator Harry Brown said the bill makes exceptions for “serious and unforeseen threats to public health, safety, or welfare.”

Through our Red, White & Water campaign, Appalachian Voices advocates is pressuring North Carolina and the federal government to protect Americans from coal ash pollution by enacting strong rules governing the disposal of the toxic waste. Learn more about coal ash and sign the pledge to protect America’s waterways here.