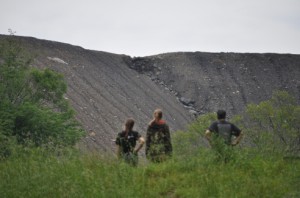 An updated report by the Congressional Research Service provides a look at the current legal and legislative challenges to mountaintop removal.

Every day, more Americans become concerned with the threat of mountaintop removal in Appalachia. Just yesterday, I was made aware of a website called “What About Mountains?” created by a fourth grade class at the Episcopal School of Knoxville. These students may just be learning about the issue, but they know that “mountaintop removal coal mining is not OK,” and seeing a photo of lush mountains reduced to “ugly blobs of land” is as fine a place to start as any.

Whether you’re in fourth grade or in your forties, it’s helpful to have a convenient compendium on the issue of mountaintop removal, especially considering the ever-evolving legal battles, status of bills on Capitol Hill, and state and federal level regulations. An updated report from the nonpartisan Congressional Research Service called Mountaintop Mining: Background on Current Controversies acts as a CliffsNotes for anyone concerned with the situation and interested in catching up.

The report summarizes the legal challenges, agency and congressional actions related to mountaintop removal and points out that, despite two recent court rulings underscoring the need for greater protections, few people on either side are please with the U.S. Environmental Protection Agency’s record on the issue. Mountaintop removal supporters complain of onerous rules that hamper employment and opponents point to poisoned water, unhealthy communities and shortened lives.

Here’s a quick summary from the report:

Viewed broadly, the Administration’s combined actions on mountaintop mining displease both industry and environmental advocates. The additional scrutiny of permits and more stringent requirements have angered the coal industry and many of its supporters. Controversy also was generated by EPA’s January 2011 veto of a CWA permit that had been issued by the Corps for a surface coal mining project in West Virginia. At the same time, while environmental groups support EPA’s steps to restrict the practice, many favor tougher requirements or even total rejection of mountaintop mining in Appalachia. Federal courts have recently rejected several of the Administration’s actions, including enhanced permit review procedures, and EPA guidance on factors used in evaluating water quality impacts of Appalachian surface mining permits. EPA’s veto of the West Virginia mine permit was overturned by a federal court, but that ruling was recently reversed on appeal.

The West Virginia mine permit mentioned is Arch Coal’s Spruce Mine, the largest mountaintop removal mining operation ever proposed in the region. You can read about the recent ruling in favor of the EPA, as well as a ruling that invalidated the U.S. Army Corps of Engineers use of a streamlined permitting process, here.

Until it was reversed last year, a central aspect of the EPA’s approach to mountaintop removal was a 31-page guidance issued in 2009 that sought to tighten requirements for surface mines using valley fills permitted under the Clean Water Act. According to EPA, the guidance is not intended to bring a complete halt to mountaintop removal mining, but was meant to pressure the industry to move away from filling valleys with mining waste.

The coal industry took up arms against this rule and began the march to fight what they’ve since called the Obama administration’s “war on coal.” Read about the 2012 reversal of EPA’s guidance and how the agency can still take action to reduce what top scientists have called the “pervasive and irreversible” impacts of mountaintop removal here.

When the report gets around to discussing congressional action on mountaintop removal, the authors include a bipartisan bill that had 132 cosponsors in the 112th Congress. The Clean Water Protection Act would sharply reduce mountaintop removal, protecting clean drinking water for many of our nation’s cities and the quality of life of residents who face catastrophic flooding, air pollution, or loss of drinking water.

Next week, at the 8th annual End Mountaintop Removal Week in Washington, Appalachians and other proud Americans will be in our nation’s capitol to speak with representatives in Congress about the bill and the need to end mountaintop removal. Read all about the Clean Water Protection Act and find out what you can do.

If you need an up-to-date summary of mountaintop removal, at just 18-pages, the CRS report is a great resource. Sure, the report’s language may be abstruse for a group of fourth graders eager to learn more, but that doesn’t take away any weight from their reminder that in Appalachia “rivers are no longer blue,” and that as long as mountaintop removal continues, it will “tear down memories and dreams to do great things.”