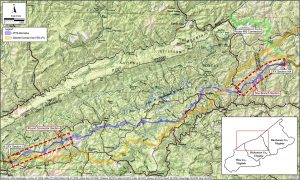 Approved on Wednesday by the Commonwealth Transportation Board, the redrawn route prioritizes Alpha Natural Resources' access to coal, not travelers' access to local communities. Click to view the full-size map.

The proposed 26-mile Coalfields Expressway is only a few miles off of several less destructive routes studied by the Virginia Department of Transportation in 2001 when it conducted a detailed environmental review of the area. The difference is that VDOT looked for a suitable place to build a highway. Alpha and other coal companies such as Rapoca Energy, on the other hand, selected the most profitable route for surface mining, using the highway as justification for the environmental toll they would inflict along the way.

This difference in purpose of the proposed routes is apparent when you look at the estimated impacts. The route VDOT selected in 2001 would have a 750-foot right of way that would disturb about 1,100 acres of land, four miles of streams and 720 acres of forest. Those impacts alone are daunting, but they pale in comparison to the redrawn route. Alpha’s path of destruction, with its 2,200-foot right of way, would flatten more than 2,100 acres, bury 12 miles of streams and clear-cut more than 2,000 acres of forest — not to mention destroy two churches and three cemeteries.

Nevertheless, VDOT sees this “coal-synergy” project as beneficial because it will cost taxpayers $2.8 billion to build, as opposed to the projected $5.1 billion without collaboration from the coal industry. The savings are disputable, however, and do not factor in the environmental cost of the road’s relocation. VDOT’s rush to make this project a reality has led them to disregard recommendations from the U.S. Army Corps of Engineers, the U.S. Environmental Protection Agency and the U.S. Fish and Wildlife Service — all of which are asking for a full environmental review of the new route.

Before yesterday’s vote, residents of southwest Virginia spoke passionately against the project, which is closer to the Pound River and the John W. Flannagan reservoir than any of the routes studied in 2001. It is also miles further from existing towns than the routes studied. The distance from environmentally sensitive areas and proximity to existing economic centers both contributed to the Commonwealth Transportation Board’s 2001 recommendation, but the discrepancies fell on unsympathetic ears.

Appalachian Voices works to promote the health and prosperity of folks living in Appalachia. It is a simple goal that leads us to believe that transportation improvements are necessary, but this highway will only continue to extract our region’s natural wealth. It will negatively impact existing small businesses and the families that rely on them and will leave behind even more impoverished and disconnected communities.

These are the communities that have produced billions in profit for the coal industry but, with this proposal, the industry and Virginia officials are failing them yet again. The proposed route and its inadequate environmental assessment still face review by the Federal Highway Administration. We need your help to ensure that Appalachia’s voice is heard.