No Longer Hidden in Plain Sight, Thanks to SoutheastCoalAsh.org!

For how large coal ash impoundments can be, they are sure hard to spot.

For example, there are two large earthen dams full of coal ash just north of Charlotte near Mountain Island Lake. Can you spot them? 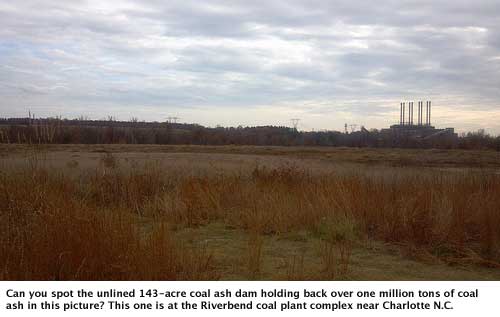 (Answer: They’re on that long ridgetop to the left of the plant.)

Since Duke Energy is probably not going to place yellow neon signs near the impoundments to alert the public to the dangers that these dams may cause to groundwater or public safety anytime soon, we did the next best thing. Working with Southern Alliance for Clean Energy and other partner organizations like Southern Environmental Law Center and NC Conservation Network, we have helped create Southeastcoalash.org. With just five key strokes (your zip code) you can see where coal ash impoundments are hiding in plain sight near you.

This information was not as easy to pull together as it should be. Since there are no federal rules on coal ash, the U.S. Environmental Protection Agency had very little information on the scores of coal ash impoundments dotting the country. The EPA only began gathering this information when a dam holding back a billon gallons of coal ash broke at a TVA plant in December 2008, fours year ago this month.

Shortly after the disaster, the EPA released a list of forty-four “high-hazard” rated dams. Almost half are located in the Southeast, most notably North Carolina with twelve and Kentucky with seven.

It has been been difficult for the EPA to get a handle of the depth and breadth of this problem. For example, the number of significant-hazard dams rose, as has the the total number of impoundments. As recently as June of this year, the EPA “found” 450 more coal ash ponds, bringing the total of known coal ash sites in the country to a whopping 1500.

Despite this mountain of information that we now have on this once-hidden danger, there was still not an avenue for the average person to access the information. This is where – dun-dun-dun– SoutheastCoalAsh.org comes to the rescue! Now you can see where coal ash may be potentially impacting drinking water supplies, your favorite fishing hole and your community’s safety.

We hope the website will give people the tools they need to speak up about these very real threats. For example:

Groundwater is occurring near all North Carolina’s 14 coal-fired power plants. A coalition challenged the state’s Department of Water Quality’s interpretation of groundwater rules. The state’s Environmental Management Commission sided with DWQ, meaning that no immediate action will be taken to stop the slow pollution occurring near the coal ash ponds.

On the federal front, we are still waiting on EPA to issue federally-enforceable safeguards on coal ash disposal. In that regulatory no-man’s-land, members of Congress looking to protect utilities profits continue to threaten to handcuff EPA from upholding their authority to protect our environment and issue rules on coal ash disposal. Senate Bill 3512 (which has already passed the House), is a sham bill that does nothing and stops the EPA from doing anything.

* gives states the discretion (read: allows them) to implement coal ash permit programs that are less stringent than the programs applicable to household waste landfills;
* has a “level of uncertainty [that] defeats the purpose of a permit program and would not be consistent with other programs under RCRA (the laws that under which coal ash would be managed).”
* provides “no federal backstop authority to implement federal standards comparable to its authorities established under other environmental law, including RCRA.”
* creates a program without “detailed regulatory standards, [which is] unprecedented in federal environmental law.”
* lacks a clear “standard of protection” to guarantee that state programs actually protect human health and the environment, which is “unique among all federal environmental law.”

Not only is this bill dangerous because it does not guarantee strong protection for our communities and waterways, but because it undermines the very pinnings of how our environmental safeguards are forged and implemented. If they can do it with coal ash, which is full of toxins like arsenic and selenium, what other environmental laws can they weaken?

Time is ticking away. Another TVA coal ash spill can happen at any time. Water is being polluted, another family is breathing fugitive coal ash dust that is coming from a landfill near their house. Four years after the country woke up to the dangers of coal ash, EPA seems to fallen asleep and Congress is intent on keeping the alarm clock on permanent snooze. Soon we might be saying, “Congress weakened the basis of our environmental laws, and all I got was this lousy water.”

Help shake our decision-makers awake before more water is polluted or another TVA disaster occurs. Check out southeastcoalash.org and become better informed. Below is a little walk-through video of the website.