Coal ash, the toxic byproduct of burning coal for electricity, is typically stored in wet, often unlined, ponds. The most recent study, led by Duke University and published in the peer-reviewed journal Environmental Science & Technology, examined discharges from these ponds and how they affect lakes and rivers at different upstream and downstream points. 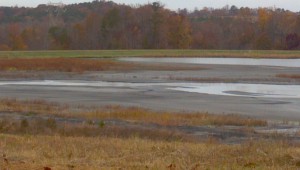 Each new page in the Coal Ash Chronicles is dripping with more arsenic-laced water than the last.

The researchers’ surface water findings are likely unsurprising to folks who are familiar with the results of state groundwater monitoring near the 14 North Carolina power plants with unlined coal ash ponds that have found frequent exceedances of groundwater standards.

Affirming that coal ash pollution also causes costly damage to fish and wildlife, a study published in the same journal this August found that, “The combined direct and indirect cost of poisoned ﬁsh and wildlife exceeds $2.3 billion, which is enough money to construct 155 landﬁlls with state-of-the-art composite liners and leachate collection systems,” and that cost is projected to increase by an additional $3.85 billion over the next 50 years. Following this report, the latest Duke University study brings new causes for alarm.

Laura Ruhl, Avner Vengosh, and other study authors found levels of arsenic in Mountain Island Lake sediment that were roughly 25 times higher than current EPA standards for drinking water, and nearly twice the EPA standard for aquatic life. Researchers also found that coal-fired power plants that use scrubbers to control air pollution often discharge water with higher levels of selenium, a toxin that can cause neurological damage to humans at high exposure levels. Dangerous byproducts of burning coal, such as selenium, are being transferred from air pollutants into coal ash, and because coal ash is not regulated as a hazardous substance, these byproducts are leaching into water supplies.