Is nothing sacred to coal companies in Appalachia? 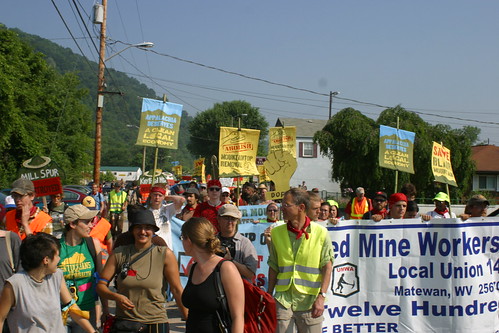 In a jaw-dropping display of contempt and disregard for the communities and landscapes where they mine coal, three coal companies back in 2009 challenged the listing of West Virginia’s Blair Mountain on the National Register of Historic Places. The companies, including mining behemoths Alpha Natural Resources and Arch Coal, opposed the listing of Blair Mountain as a historic site because it could interfere with their plans to conduct mountaintop removal mining operations on the Spruce Fork Ridge battlefield, site of the “largest organized armed uprising in American labor history,” and the most important historic landmark in Central Appalachia.

The 1921 Battle of Blair Mountain was the culmination of a three-year struggle to unionize the coal mines of southern West Virginia and ended only when federal troops intervened on behalf of anti-union coal companies. There are few sites as significant as Blair Mountain that commemorate the brave men and women who laid down their lives for a movement that has brought Americans everything from the weekend to child labor laws to the largest and most prosperous middle class the world has ever seen.

The battlefield on Blair Mountain was listed as a national historic landmark in 2009, but under pressure from coal companies, the West Virginia Historic Preservation Officer reversed that decision several months later. Last Week, a federal judge threw out an appeal by a coalition of environmental and historic preservation organizations led by the Sierra Club that sought to restore the historic designation.

Given the national importance of the Blair Mountain battlefield, why did the judge side with the coal companies? It turns out, the ruling had nothing to do with whether or not Blair Mountain deserves designation as a historic landmark. Even though the “factual background” of the case raised big questions about the evidence used to justify the de-listing of Blair Mountain, the judge denied the plaintiffs legal standing to sue on the grounds that any injury (i.e., destruction of the battlefield) resulting from that decision was “purely conjectural.” Heck, who could predict whether Alpha Natural Resources and Arch Coal will actually decide to seek new permits or make use of their existing ones to blast Blair Mountain into smithereens in order to make a few million bucks for their shareholders?

While there’s little value in non-lawyers critiquing a judge’s decision, the important thing for the rest of us is to ensure that Blair Mountain does not get blasted off the map – a goal that could be accomplished by a number of other means. Given the assertion of the judge that Arch Coal and Alpha Natural Resources could choose not to use their permits to blast away the mountain, one solution might be to convince those companies to do the right thing. I would encourage anyone who thinks they have leverage to convince the CEOs of these companies to preserve Blair Mountain to give it a shot, and do it soon.

But for my part, I hold out little hope for that solution. While blasting apart Blair Mountain for a few million tons of coal might be the moral equivalent of developing the battlefield at Gettysburg into a massive toxic waste dump, this episode demonstrates once again that big coal companies value the moral high ground about as much as they value the high peaks, ridges and headwater valleys of Appalachia. Which is to say, their “values” appear to go no further than the numbers after the dollar signs in their quarterly profit-and-loss statements.

The other, more likely scenario would be for Americans to convince the President and his administration to definitively protect the Blair Mountain battlefield through one of a number of tools at their disposal. Those tools include using the Antiquities Act to designate Blair Mountain as a national monument, directing the National Park Service to revisit its questionable decision to de-list the the site as a historic landmark, designate the mountain as “Lands Unsuitable for Mining” under the Surface Mine Control and Reclamation Act… there are any number of routes the Administration might take to prevent the destruction of Blair Mountain if it feels compelled to do so.

That’s where you come in. The bottom line is that protecting this invaluable and irreplaceable landmark is well within the administration’s power, and the President is accountable to you. So please, take this opportunity to tell the President how important it is to you that Blair Mountain be protected and demand his agencies use every means at their disposal to ensure it is not blasted off the map.