Celebrating the Past, Working for the Future

I have only seen a bald eagle in the wild once. It was during an otherwise uneventful excursion on Lake James near Morganton, N.C. It soared silently overhead, and in a matter of seconds I felt my stomach tighten, the hair on my arms stood up and tears welled up in my eyes. I considered it a gift. 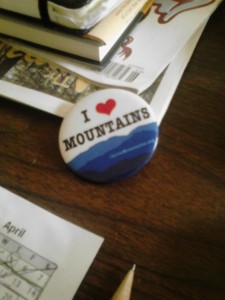 That’s the first memory that came to mind when I began to write this post — how I once was lucky enough to see a bald eagle, our national bird and a symbol of our national pride, glide across a lake. The Fourth of July calls not only for the commemoration of our still young nation’s independence, but for the multitude of things that make America great. But before we light up the sky tonight, it seems appropriate to reflect on the nature of our national pride.

Surveying my desk, the lack of red, white and blue makes me self-conscious. Finally, I spot one of the “I Heart Mountains” pins so ubiquitous around the Appalachian Voices office. Its blue ridges and bright red heart bring the same emotions as that tried and true trio of colors. But it’s the simple phrase that evokes feelings of pride for the places and people we work to protect. After all, when we say we love America, we mean we love the people and places in America as much as the ideals on which the nation was founded.

In the absence of national birds and colors, the symbols of our patriotism and pride, our love of a place or an idea as abstract as “The American Dream” need not be tangible. But for them to remain believable we’ve got some work to do and obstacles to overcome.

While we’re on the subject though, have you heard the story of the bald eagle? The iconic bird numbered in the hundreds of thousands and flourished throughout North America long before the Declaration of Independence was signed. It wasn’t until the mid-20th century that bald eagle eggs began thinning and adult birds became sterile due the widespread use of DDT. The bald eagle nearly went extinct in the continental United States. Federal laws, regulations and the ban of DDT made for a brisk recovery.

On one hand, the bald eagle success story speaks to American ingenuity and values. Unfortunately, it also is a reminder that we’re not doing enough to protect many Americans’ health, and the inalienable rights we celebrate today.

A good place to start might be to acknowledge that millions in America are still marginalized, whether by a natural disaster, a nearby mountaintop removal mine, an oil spill or any number of economic and societal factors. Underneath the statistics used by politicians and pundits are the families that may have little other reason to celebrate than the fact that they are proud to be American.

A series by Environmental Health News does just that. “Pollution, Poverty and People of Color” reveals the struggles of minority populations dealing with our collective dirty habits. Rather than the insecticide that threatened our national bird, these communities live with the health impacts of oil refineries, chemical plants, Superfund sites and toxic waste dumps. Low-income residents seeking affordable homes may save money on shelter, but they pay the price in health. The stories EHN found in seven diverse but impoverished communities across the country resonate with all of us, no matter what color or class. We’re all Americans and we’re in this together, so to speak.

Rarely has there been another time when our society has been so pressured to either double down, caving to those who believe rolling back environmental protections will allow for the unimpeded economic growth they falsely identify as the American way, or go back to the drawing board with the recognition that our current trajectory is perilous. The former is hardly an viable option. The latter would mean setting extremism aside and working together again. There are plenty of reasons to celebrate America. Let’s keep working to create more.