I landed at the airport in Jacksonville, FL., on Saturday afternoon, April 14, 2012 at the behest of Jason Fults who invited me to be part of the second Gainesville Loves Mountains series of events and activities. The image of two smokestacks near Jacksonville, seen from high above the earth, seemed to drive their image into my chest as we descended. It haunted me for quite awhile but quickly dissipated by the warm and wonderful people I met afterward.

Saturday night was devoted to getting to know my extraordinary hosts, Jason Fults and Laurel Nesbit, and I was thankful for that time to unwind slightly before we wound ourselves up again for what has proven to be a whirlwind of events. 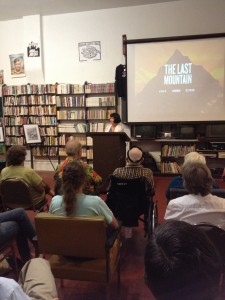 The very next morning, I attended service with amazing people at UC Gainesville. It was a beautiful service, amazingly inclusive, a wonderful sermon by a seemingly “too young to be a minister” young man named Vince Amil. The repetitive words from a song stuck with me: “When the worship is over, service begins.” After crossing a very inviting courtyard, we met at 11:00 in a separate room for an Adult Education Class on Mountaintop Removal. How cool is that? I left them with a book for the church library accessible to all to remind others of the consequences of burning fossil fuels in this country, the consequence that is most often left out and ignored, the consequence of the extraction process on the Appalachian region and its people. I left there knowing in my heart that these intelligent, thoughtful people would engage and continue to be creative in ways not yet imaginable by me.

Circles close quickly when we are open to others and will have heartfelt conversations with them. I met a woman in the Church who was born in Wise, VA, where I have lived nearly all my life.

After a swift change of clothes, we headed down town to the ongoing Arts Festival to pass out flyers for the Monday night event, the screening of the documentary “The Last Mountain” at the Civic Media Center on Main Street. Most folks at the festival were receptive, few blew us off, and I also walked away with a couple of pieces of local pottery that will continue to remind me of Gainesville far into the future.

All of this was followed by a ride into the country to visit the Nesbit farm, probably one of the very few hills in Florida, do a bit of walking, visit chickens, pigs, lots of vegetables, an ongoing project for a Cobb oven and have a wonderful dinner underneath a hand built pavilion outside, with almost everything on our plates coming from the farm. Thanks to Rick and Jane Nesbit for wonderful food, wonderful friendship, and such genuine warmth and obvious love of family.

On Monday morning as planned, I met up with a young, vibrant Ph.D. student from the University of Florida who escorted me on campus to make sure that I arrived at the Sociology Class, to which I would deliver a MTR presentation, on time. Thank goodness for Robert Perdue and a special thanks to Ginger, the professor of the class, for inviting us and helping with setup. Robert had paved the way with this class by priming them on the process of mountaintop removal (previously only five had raised their hand when asked if they knew what mountaintop removal was). The clock ticked too quickly, we left time for Q & A, of which there was several. Some students were shocked by reality, but the all important question was asked, “What can we do?” We spoke of the future, a bigger dream, a much bigger plan, but in the meantime, a national initiative, the Clean Water Protection Act, and local initiatives afoot through Jason’s group here. The group has pushed GRU (that’s the local utility) to use 0% mountaintop removal coal, and are busy as bees working on a local energy efficiency ordinance that would help renters have lower electric bills and the home owners have more profit while helping the environment. That will be a win, win, win.

Robert and his wife and their young family were gracious to invite me to lunch at their home, including some “patentable” chicken salad and handmade biscuits before I began an afternoon of calls to the press to invite them to cover our screening at the Civic Center that evening.

In a scurry then, we packed our “stuff” and headed to the Media Center. The room swiftly filled. It was a great evening with joint participation by several different groups.

There are so many whom I wish to personally thank for making these events such special occasions: UC Gainesville Church, Sierra Club Suwannee St. Johns, the Civic Media Center, Scott Camil and Sherry Steiner, Kim Ross, Jason Fults and Laurel Nesbit, Anna Grace Sampson for her art which I must now explore, Robert Purdue and Ginger Jacobson from the university, Russ Anderson, and so many more.

We had a full house at the Center, it was a special evening and I walked away feeling like we are in the same boat fighting for a just and fair future in an environmentally sound produced energy supply. I spotted a representative of the Swallowtail Farm present and remember imagining the chickens flying the “movable coop” hailing banners against mountaintop removal and messages about the Appalachians being a national treasure.

Tuesday was free early in the day. Laurel and I both slept in and then headed to the prairie to enjoy the outdoors, spot bison and explore the area. I appreciate the lesson in the water aquifers of Florida, how the land across the prairie is really a drainage basin before the water sinks through limestone into Florida’s aquifers to be withdrawn when needed. We didn’t find bison, but found other animals to capture our interests. One needs to look closely for alligators, including small ones. They are quite elusive.

We did get quite an up close look at a group of wild horses with two colts, of different ages, and watched closely as they crossed the path right below and by us for a watering hole with gators. It reminded me of the line, “It takes a village to raise a child” as the larger of the horses seemed anxious to protect the colts. The gators, though one moved slightly, made no move on the pack. Thank you Laurel for such a great adventure into Florida’s nature and an introduction to Florida’s famous salamander.

Before an evening back at the University of Florida, Jason and I headed to the GEAC, the Gainesville Energy Advisory Council, in downtown Gainesville, to meet some very interesting folks. Jason had a valid interest in speaking to them and providing info about the proposed energy efficiency conservation measures, but mountain top removal had also found its way into its agenda for a short speaking opportunity. I was pleasantly surprised by the range of ages in the group — a good mix carries a good message: Get involved early! The reception was warm and cordial, they listened intently, with a couple of good suggestions coming from a young member of the group later.

From there, we headed in flight to UF, Rinker Hall Rm 210, for a screening of a different film this time: “The Electricity Fairy”. It chronicles the controversy over Dominion Virginia Power’s coal-fired plant in Wise County, where I live, currently under construction and shortly to go on-line. The Washington Post put it best when they said: “If it were possible to build a coal-fueled power plant in Virginia without controversy, it would happen here. In the state’s Appalachian southwest, there is coal in the hills, coal in the rail cars, and coal in family histories that stretch back to picks and shovels.” Apparently, it’s not possible. The crowd was not large but we had a very thoughtful and engaging conversation after the film and made new friends as well.

The following morning, Laurel and I headed out to the Volta downtown to a coffee shop I learned was owned, partially at least, by its workers. The coffee shop also provides a spot for folks to meet to talk. But this morning the subject was not mountaintop removal but grass fed beef. I met with a gentleman who works for the local Habitat for Humanity organization about possibilities for future collaboration. Not many questions or ideas were settled but certainly several were introduced and laid on the table. He is from UC Gainesville, so thank you once again. I must introduce Scott and Jason. I know they can be beneficial working partners.

I loaded my things, hopped in my rental, and headed back to Jacksonville for a flight home. I would leave the large stacks behind, try not to think of them, and take with me the warmth and the welcome of my new friends in Gainesville where we have solidified our renewed commitment: They love mountains too.