Snake Handlers, Strippers and the KKK: CNN’s Portrait of “Everyday Life in Appalachia”

So CNN ran a sensationalized and superficial story built on stereotypes that lacked any news value. Big news, right? Grow up, kid, this is the entertainment business…

That’s an excerpt from the conversation in my head before deciding to write a post about the photo-essay that was posted on the front page of CNN.com on Monday with the teaser image of a burning cross. The link was titled “Everyday Life in Appalachia.” 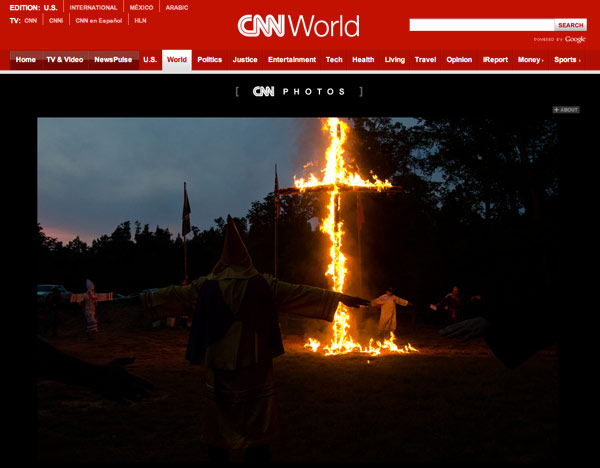 I’ll spare you the righteous indignation and the pages of moralizing that virtually burst from my fingertips and get right to the point of why it’s worth calling attention to this particularly offensive piece of pseudo-journalistic garbage: misleading stereotypes have real world consequences.

In speaking with people all over the country for the last 10 years about the need to end the wholesale destruction of Appalachian mountains ,streams and communities from mountaintop removal coal mining, I often get the question: why are local people letting this happen? The answer, of course, is that they are not letting it happen. We — all Americans — are letting it happen.

We are allowing a unique and distinctly American culture and the oldest and most biologically diverse mountains and streams on the continent to be destroyed because it’s something we believe is happening somewhere else to somebody else. Of course it’s sad that these charming, albeit hopelessly degenerate cross burners, snake handlers and shirtless, barefoot hillbillies are being displaced by the march of progress, but it’s not like it’s something that is happening to people like me…

Except that it is. The real Appalachia looks a lot more like the photos on your smartphone than the photos of snake handlers and burning crosses that CNN billed as “Everyday Life in Appalachia.”

What would happen if Americans realized that people just like them – accountants, engineers, welders, professors, miners, truckers, teachers, mothers, fathers, sons, daughters – are living with polluted drinking water, are three times as likely to have children born with birth defects and have a life expectancy comparable to that in developing countries like Iran, Syria, El Salvador and Vietnam? At Appalachian Voices, our theory has long been that bringing Americans to this realization is a crucial prerequisite for mustering the national will to end the destruction of Appalachian mountains and communities by mountaintop removal coal mining. For this reason, CNN’s prejudiced and exploitative treatment of Appalachian culture is not just offensive, but extremely damaging.

It’s hard for a small, under-resourced organization in Appalachia to compete with CNN’s megaphone, which is why we need your help. We set up a facebook page and a twitter hash tag #realappalachia for our friends and allies to show CNN and all Americans what the real Appalachia looks like. Here’s your assignment: post, tweet or e-mail a few of your favorite pictures of Appalachia and we’ll compile them here, on facebook and share them with the editors of CNN.com.