“Areas with especially heavy mining have the highest unemployment rates in the region; contrary to the common perception that mining contributes to overall employment.” – Dr. Michael Hendryx 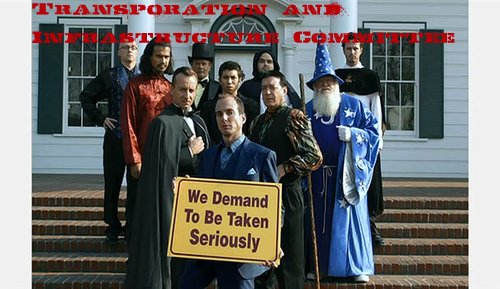 Congressional Republicans, led by rogue Democratic Congressman Nick Rahall, will hold a hearing today in the Transportation and Infrastructure Committee’s Subcommittee on Water Resources and the Environment (phew!) that has absolutely nothing to do with reality. This farcical hearing, scheduled especially for Cinco De Mayo is EPICALLY titled: “ EPA Mining Policies: Assault on Appalachian Jobs – PART 1.” WAIT A SECOND?! What is this title, a Styx song? Is this seriously supposed to be a substantive Congressional hearing? There are plenty of jobs being lost, and population being lost, and lives being lost in Appalachia.

But Rahall and co are missing a simple fact. Mining jobs are on the rise in Appalachia, and EPA’s policies are helping to create MORE mining jobs in the region. More on that below.

This is a complete and utter joke of a one-sided hearing, and a waste of our tax dollars. Not only that, but Rahall and his buddies running the subcommittee made sure to block out the voices of Appalachian citizens, scientists, and other rational people. Oh, and by the way…they DEMAND to be taken seriously.

—-
1) Mining Jobs
Lets talk about them. According to the Energy Information Administration, there are about 34,000 mining jobs in all of Central Appalachia (southern West Virginia, eastern Kentucky, Virginia, and a few counties in Tennessee) as of 2010. This includes “…all employees engaged in production, preparation, processing, development, maintenance, repair shop, or yard work at mining operations, including office workers.” This employment number is on the rise over the last decade even though coal production has plummeted in the region. Why? Because companies are relying on underground mining for an increasingly large share of their coal. Underground mining employs more people than mountaintop removal (one of a multitude of benefits you get from not blowing up a mountain and dumping the toxic waste into headwater streams.) So, why are we always showing you the graph below detailing the historical loss of mining jobs, specifically in West Virginia? 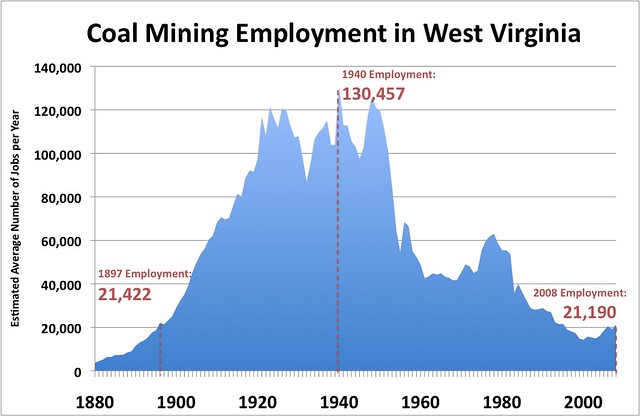 Because there IS an assault on mining jobs in Appalachia. Namely – MOUNTAINTOP REMOVAL, a practice used specifically to take the miner out of the mine. 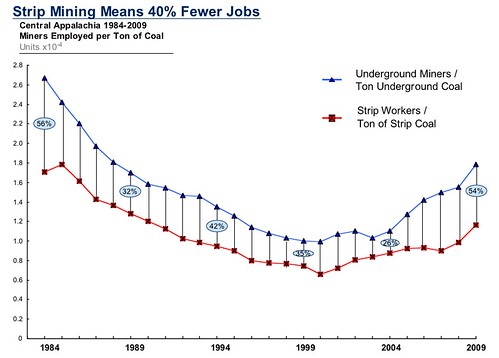 SO, EPA’s continued protection of human health and clean water is driving production away from surface mining and towards underground mining, which employs far more people. Ergo (and this is the really important part)…

2) EPA’s mining policies are creating mining jobs in Central Appalachia that otherwise would not have existed. Meanwhile, the coal industry is making money hand over fist

WHAT?! How is that possible? I thought that the President had declared a war on coal, and was determined to shut down coal mining and to end coal and to kill coal and to destroy coal and to attack our way of life? I thought the EPA was a socialist plot to overthrow American businesses and values and freedoms and coal jobs and liberty?

YES, we’ve been subject to the networks and local politicians echoing what Mike Casey calls coal’s fantasy that this dirty fuel is a clean, sustainable, job creator. The truth is that reliance on coal mining has sucked the jobs, opportunity, and economic vitality out of huge swaths of Central Appalachia.

…[f]ossil fuel production has not insulated energy-producing states from fiscal crisis…[t]he volatility of fossil fuel markets poses obstacles to the stability and long-term security of economic growth in energy-producing regions.” …This is a problem for the coal industry, which spends heavily to construct a fantasy world in which it’s a “clean” industry to which we should feel grateful, a vital supplier of our power, and an economic lifeline to host communities.

Appalachia is hurting economically, in large part due to an overreliance on unsustainable mining practices. But its not like the coal industry itself is hurting under EPA’s current mining regulations. For Q1, coal companies are already bringing in the dough, with Alpha (who is buying out Massey Energy) just announcing that their Q1 profits had tripled! Patriot announced record revenue, with the boss saying;

…year-to-date coal production in Central Appalachia has increased over the prior year.

Arch is pulling a handsome profit, while specifically not citing EPA as a problem in driving up costs. CONSOL says they made record revenue, while the CEO stated:

How TERRIFICALLY annoying for all of us that Congressman Rahall doesn’t have the slightest clue what he is doing when it comes to making public policy.. 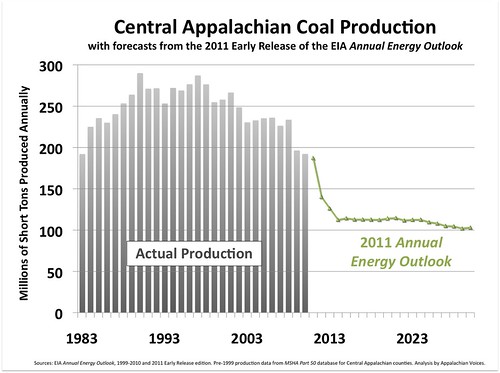 Central Appalachian production is declining, with mountaintop removal making up less than 5% of US electricity generation. The bottom line is that U.S. coal production is limited by demand for coal, not by the ability of companies to obtain permits for mountaintop removal mines. According to energy analysts as well as executives from Arch Coal, Peabody Energy, and Southern Company, declining Central Appalachian coal production is the result of competition from lower cost natural gas. Coal mines across the country are producing at just 75% of their capacity – down from 85% in 2008 – and the Energy Information Administration projects that coal demand won’t recover to 2008 levels for another 15 years. Coal from mountaintop removal mines could easily be replaced if other US mines were operating at just 81% of their capacity. So, theres that.

If Congressman Rahall knew the first thing about Central Appalachian mining, he might include some expert witnesses, or citizens whose lives are forever impacted by the very unnecessary (and unpopular) method of mining called mountaintop removal. Poll after poll show that a majority of people across America and across Appalachia oppose mountaintop removal. His constituents seem to agree, as Rahall’s district in southern West Virginia is being swiftly depopulated.

But hey, at least the citizens of WV-03 still have it better off than their neighbors in KY-05, the only district with MORE mountaintop removal. 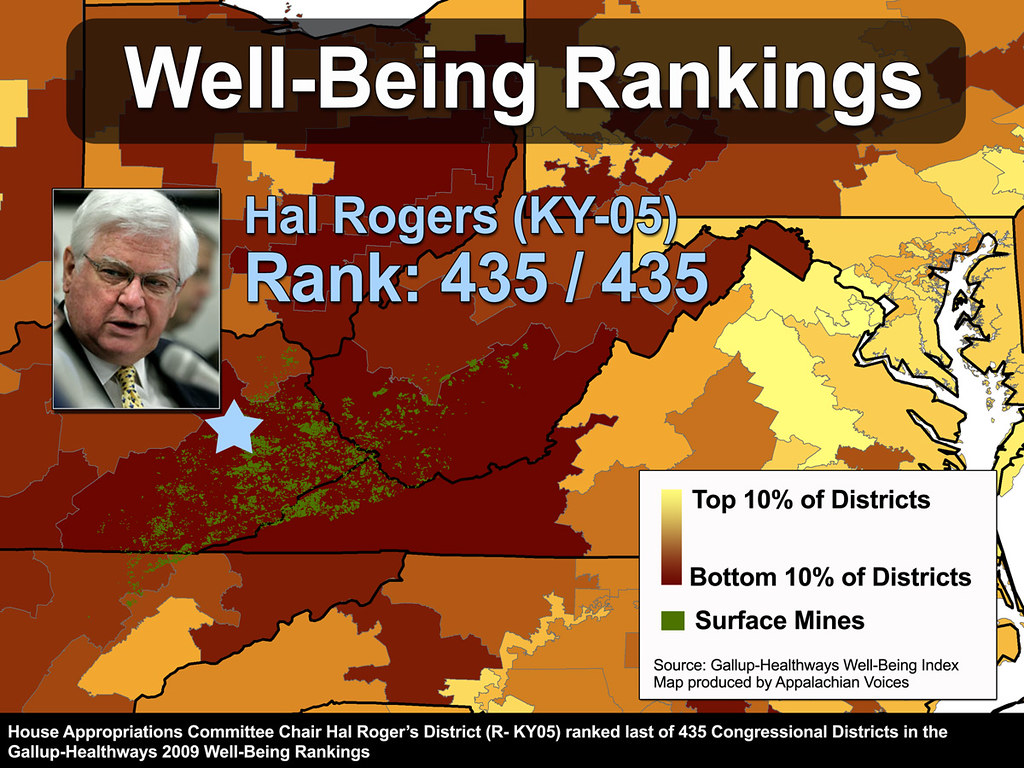 We all have ideas on how to provide job growth and economic opportunity for our region, but one thing is clear. MORE mountaintop removal is not the answer. There are real problems to be addressed in Appalachia and this goofy hearing is a great big whiff.