The Heart of the Mountaintop Removal Movement

When Ollie “Widow” Combs laid down in front of a bulldozer that was preparing to strip-mine her Kentucky farm in 1965, it’s doubtful that she realized her actions to protect her land would grow into a movement. Today, women’s voices are among the loudest in the fight to protect not only personal land, but drinking water, clean air, the natural environment and the very culture that Appalachia thrives on. Here are but a few of those amazing voices.

It is with a heavy heart that we witness the passing of one of the greatest Appalachian leaders in our country’s history, Judy Bonds.

A loyal friend, inspiring leader and a proud family woman, Judy will be remembered for her unwavering commitment to the people of Appalachia and for her heroic efforts to ending mountaintop removal coal mining.

With her sharp wit and quick smile, Judy was a joyful peer, an engaging collaborator and a powerful and beautiful storyteller who told the rest of America the story of Appalachia and its people. Judy stood up for her region at great personal risk to herself, facing arrest, threats and even assault from allies of a corrupt coal industry.

Born in Marfork Hollow, W.Va., she was the proud daughter of a coal miner. In 2003, Judy received international acclaim, winning the prestigious Goldman Environmental Prize for community organizing at a time when few people had even heard of mountaintop removal.

Like many Appalachian women, Judy was intimately familiar with the flora and fauna around her. “See that? That’s the ironweed,” Ms. Bonds once said, pointing out a purple-flowered plant to a visiting reporter. “They say they’re a symbol for Appalachian women. They’re pretty. And their roots run deep. It’s hard to move them.”

As much as Judy loved her home, she spent years on the road bearing witness to the problems in Appalachia and inspiring thousands of people to join the movement to end mountaintop removal. Her organizing efforts were palpable at the national level and in her own backyard, where she confronted dangerously overloaded coal haul trucks, was instrumental in the campaign to build a new Marsh Fork Elementary School and fight tirelessly to end the poisoning and blasting of her own community.

Recognizing the corruption and ineffectiveness of many Appalachian politicians, Judy also spoke about the importance of organizing across the nation and bringing the fight to Washington D.C.

Judy’s family lived in Marfork Hollow for six generations until she was forced to leave in 2001, as the last residents of a community ravaged by mountaintop removal. She recalled standing in a creek in the Coal River Valley with her 7-year old grandson, his fists full of dead fish, and knowing that something was going horribly wrong. Fueled by her first-hand knowledge of the injustices faced by coalfield citizens Judy went on to become the director of Coal River Mountain Watch, and a leading voice calling for justice in Appalachia, helping build a national movement.

“When powerful people pursue profits at the expense of human rights and our environment, they have failed as leaders,” Ms. Bonds once said. “Responsible citizens must step forward, not just to point the way, but to lead the way to a better world.”

Words will fail to express the awe we all shared as we watched Judy live her life, the gratitude that we feel for her leadership and courage, or the loss of a friend that is felt in our shared community. It is a community that is much larger thanks to Judy Bonds. Judy’s family has asked that donations be made to Coal River Mountain Watch, www.crmw.net

Kathy Selvage | A Woman “Wise” Beyond Her Years

With a sweet demeanor and a southern disposition rivaling any Georgia Peach, you might not take Kathy Selvage for a fighter, but she is.

A coal miner’s daughter from Wise County, Va., Selvage has always had a great respect for miners, but when a coal company began blasting off mountaintops in her community, Selvage began working to bring national exposure to mountaintop removal coal mining.

She has been a citizen lobbyist for five years at the annual Week in Washington and has appeared in films such as Coal Country and Electricity Fairy. As part of the Wise Energy for Virginia Coalition, Selvage was instrumental in the fight against a proposal for a Wise County coal-fired plant.

She was the recipient of the 2006 St. Francis Ecological Award of Sowers of Justice and was named in Blue Ridge Country magazine as one of 14 individuals shaping the region.

“Appalachian women are hard working women,” said Selvage. “We are multi-taskers, we are given to great thought and we are people of action.”

Lorelei Scarbro | She Knows Which Way the Wind Blows

Lorelei Scarbro has a vision for the economically poor of Coal River Valley in W.Va. to create a thriving and empowered community with the capacity to shape its economic future.

Scarbro, a W.Va. native, has worked to help establish the Boone-Raleigh Community Center in Whitesville. By providing a “third space” (outside of home and work), Scarbro encourages local residents to come together in a spirit of community to reclaim local traditions and create new ideas, with the hope of stimulating local entrepreneurship.

She has also been a passionate advocate for a wind farm on Coal River Mountain as an alternative to mountaintop removal mining.

Ann League | A Force to be Reckoned With 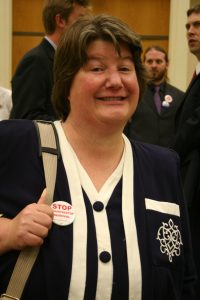 When Ann League’s dream home near Zeb Mountain in Tennessee was threatened by mountaintop removal, she decided to become involved with Statewide Organizing for Community eMpowerment (SOCM), where she now works as an organizer.

“I do this work because I love the mountains, and I have a deep seated feeling of southern Appalachian heritage,” said League. “I don’t know if I have a good voice, but I have learned I have a loud voice.”

A few years ago a bill was introduced in the Tennessee legislature that would create a buffer of protection around streams near mining. It was a good bill – except for a loophole that eliminated most of the protection.

“The regulators said it wouldn’t matter, because they were only tiny streams,” said League. “But we had members who fished and kayaked these 50-foot wide streams, and they brought in pictures and stories, and the legislators listened. They fixed the bill, it passed and we learned later that this protection set a precedent for all of Appalachia.”

In addition to her work in Tennessee, League is a leading member of the Alliance for Appalachia, often traveling for lobbying visits.

“Ann has a tireless presence in the hallways of Congress,” said Bill Price, a community organizer for the Sierra Club. “She is a true force to be reckoned with and could go against a paid industry lobbyist any day of the week and come out ahead.”

Fellow organizer Chris Hill adds, “From the hills of Tennessee to Capitol Hill, Ann is one of the most energetic and caring individuals I know. With her humor and passion, Ann always brightens up the room.”

Ann League knows how to find the common denominator between people – and these connections often involve food.

“I have a philosophy that I deal with people with respect and camaraderie till they prove to me otherwise. If we can find a way to work together, then I’m willing to share a barbecue recipe with them.”

Vivian Stockman | A Picture’s Worth a Thousand Mountains 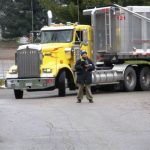 “My grandpa had an inspiring connection to the land and he taught me that,” said Stockman. “All life is important; Salamanders can’t read a sign that says don’t drink the water.”

“But I do this work because the people impacted are my family. Whenever I drive away from an event, I think, I love us! The people in this movement help keep me going.”

Teri Blanton began organizing in Harlan County, Ky., when a toxic Superfund site ruined her community’s water. As a fellow with Kentuckians for the Commonwealth Canary Project, Teri has become one of the region’s most powerful voices for a just, sustainable future.

“It’s important to build new leaders so that everyone is speaking for themselves,” said Blanton. “I hear stories of injustice every day that makes me sick. I met a little girl just two weeks ago who is sick and coughing from coal dust. To a coal company and their profits, this little girl’s life means nothing. People are paying a real price for so-called cheap energy.”

“To keep going, you have to take this suffering and turn it into a source of strength,” said Blanton. “When people tell their stories, it can’t stop there. We have to turn them into action.”

Maria Gunnoe | Turning Spirit and Grit into a Goldman 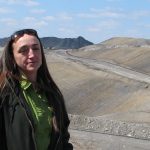 When floods from a nearby mountaintop removal mine washed away acres of Maria Gunnoe’s ancestral land in Boone County, W.Va., she began to tirelessly organize with Ohio Valley Environmental Coalition to stop the mine and protect other communities from the same fate, despite threats against her life.

“Maria is a prime example of true Appalachian spirit and grit. She goes out of her way to help someone in need, and won’t think twice to stand up to those who do wrong,” says Dustin White, who works with Maria to protect cemeteries from mountaintop removal.

Maria’s tenacity earned her a 2009 Goldman Environmental Prize and stopped expansion of the mine behind her house. I met a little girl just two weeks ago who is sick and coughing from coal dust. To a coal company and their profits, this little girl’s life means nothing.

She is currently working to keep the community of Twilight, WV from being lost to mountaintop removal. Learn more at mtrstopshere.org

If you think you can handle the sticker shock, Senior Policy Analyst Dr. Margaret Janes can tell you a lot about the true cost of coal and industrial agriculture.

As a 16-year veteran of The Appalachian Center for the Economy and the Environment (ACEE), Janes has worked on issues ranging from industrial agricultural pollution to mountaintop removal coal mining.

Thanks to Jane’s in-depth research and the talented team at ACEE, mining and agricultural polluter’s have been required to clean up their act while the laws and regulations which safeguard the health of the region have been improved.

Find out more about Jane’s and the Centers’ work at appalachian-center.org.

Margaret Palmer, a professor at the University of Maryland Center for Environmental Science and Director of the Chesapeake Biological Laboratory, has done much to shed light on the biological impacts of mountaintop removal on streams.

Although she received her PhD. in oceanography, she turned her attention to freshwater systems, focusing on ecologically effective restoration of rivers and streams. She was a lead scientist on the blockbuster study showing the impacts of mountaintop removal to be “pervasive and irreversible.”

She even brought the issue of mountaintop removal to a new audience during an interview with Comedy Central host Stephen Colbert, managing to outsmart him on every one of his trick questions and laughing at each of his quirky little quips.