It is with a heavy heart that we witness the passing of one of the greatest community organizers and Appalachian leaders in our country’s history, Judy Bonds. 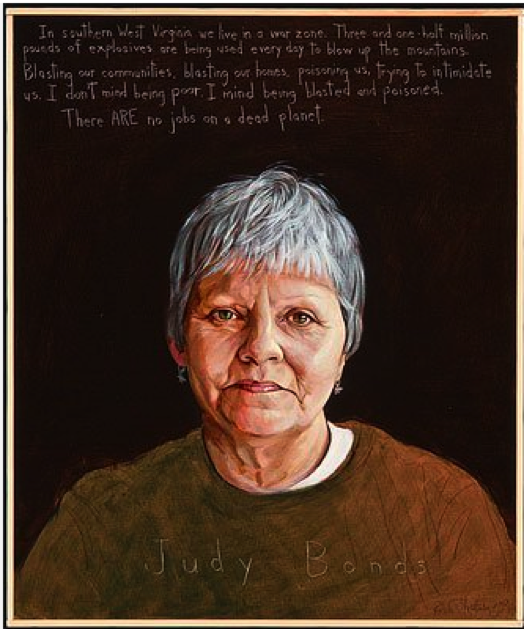 A loyal friend, inspiring leader, and and a proud family woman, Judy will be remembered for her unwavering commitment to the people of Appalachia and for her heroic efforts to ending mountaintop removal coal mining. With her sharp wit and quick smile, Judy was a joyful peer, an engaging collaborator, and a powerful and beautiful storyteller who told the rest of America the story of the Appalachia and its people. Judy stood up and spoke up for herself and her region at great personal risk to herself, facing arrest, threats, and even assault from allies of a corrupt coal industry . Born in Marfok Hollow,WV a proud daughter of a coal miner, Judy, received international acclaim in 2003, winning the prestigious Goldman Environmental Prize for community organizing at a time when few people had even heard of mountaintop removal.

As much as Judy loved her home, she spent years on the road bearing witness to the problems in Appalachia, and inspiring thousands of people to join the movement to end mountaintop removal. Her organizing efforts were palpable at the national level and in her own backyard were she confronted dangerously overloaded coal haul trucks, was instrumental in the campaign to build a new Marsh Fork Elementary School, and fought tirelessly to end the poisoning and blasting of her own community. Recognizing the corruption and ineffectiveness of many Appalachian politicians, Judy also spoke about the importance of organizing across the nation and bringing the fight to Washington DC.

Judy’s family lived in Marfork Hollow for six generations until she was forced to leave in 2001, as the last residents of a community ravaged by mountaintop removal. She recalled standing in a creek in the Coal River Valley with her 7-year old grandson, his fists full of dead fish, and knowing that something was going horribly wrong. Fueled by her first hand knowledge of the injustices faced by coalfield citizens Judy went on to become the director of Coal River Mountain Watch, and a leading voice calling for justice in Appalachia. Judy was a constant presence on high school and college campuses, galvanizing to the youth of America into stepping up and taking leadership roles in the fighting climate change, ending mountaintop removal, and building a national justice movement.

When powerful people pursue profits at the expense of human rights and our environment, they have failed as leaders. Responsible citizens must step forward, not just to point the way, but to lead the way to a better world. – Judy Bonds

Judy Bonds from On Coal River on Vimeo.

Words will fail to express the awe we all shared as we watched Judy live her life, the gratitude that we feel for her leadership and courage, or the loss of a friend that is felt in our shared community. It is a community that is much larger thanks to Judy Bonds.

To read more about Judy, Jeff Biggers has written an absolutely beautiful tribute at Huffington Post.