Appalachia rises up at rally in D.C.! 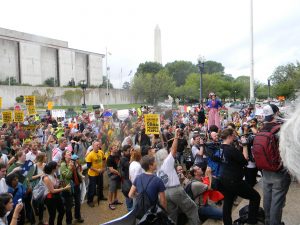 Hundreds gathered at the EPA building to protest MTR.

Participants of Appalachia Rising, a weekend-long conference on citizen lobbying, civil disobedience, and the ins and outs of mountaintop removal, gathered in a Day of Action to ask our nation’s representatives to stop destructive coal mining practices caused by mountaintop removal.

The majority of protesters were part of smaller organizations, student coalitions, church organizations, or came on their own. All of the groups marched together, stopping in front of the EPA to rally, shouting in protest for their fellow citizens, the dirtied waters and the destroyed mountains that have from suffered this practice.

“All the individual groups from their hometowns, where their history and their lives are, saw a need and they acted on that need,” said Teresa Zaffiro, a student activist from Cincinnati, Ohio. “They came together to be here. That, to me, is what grassroots is. This movement is so organic and genuine and effective. It’s going to make a difference.” 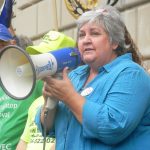 As a symbol of solidarity with those who have suffered from the life-threatening effects of mountaintop removal mining, over 100 citizens were arrested during a non-violent demonstration in front of the White House, as the rest of the protesters cheered them on from the sidelines.

The march began at Freedom Plaza, went down Pennsylvania Avenue, past the U.S. EPA building, and arrived in front of the White House to rally.

“My group is here from Oberlin College as part of a direct action affinity group,” said Daniel Felicio, who grew up near the town of Centralia, PA, home to the largest and longest burning underground coal fire in the country. “We came to protest the Department of the Interior because it gives permits to the coal companies to mine these mountains. We did a sit-in at the department and shut them down for an hour.”

The action will continue today in a day of citizen lobbying sponsored by the Alliance for Appalachia and Appalachian Voices. Appointments have been set up in congressional offices for citizens to meet with legislators and ask them to vote on two companion bills, the Appalachian Restoration Act (S. 696) in the Senate and the Clean Water Protection Act (H.R. 1310) in the house, both will make amendments to protect the waters that are dirtied from this practice.

To learn more about the movement, visit ilovemountains.org and check back here for updates!