On the Road…In New England!

Well this week our team hit the road for an Appalachian Treasures tour of the New England States in hopes to raise awareness about the issue of mountaintop removal coal mining and the importance of the Appalachia Restoration Act (SB 696) in the Senate. 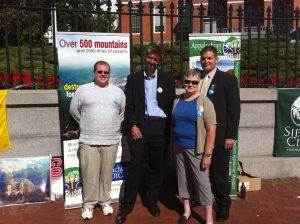 Our road warriors are:

Dustin White, who was born and raised in West Virginia and grew up in the coalfields. He is the son of a retired coal miner and his family has been living in Appalachia since before the Revolutionary War. He is a volunteer with Ohio Valley Environmental Coalition and became actively involved in the campaign to end Mountaintop Removal when Horizon Resources began active blasting at a mountaintop removal site on a mountain named for Dustin’s family, Cook Mountain, where his ancestors once lived. He continues to fight for protection of his family cemetery and others across Central Appalachia.

Mary Bettis Love, a native of Knoxville TN, has lived in and around Louisville KY for the past 22 years. Her roots in Appalachia are deep, with family having settled in East Tennessee near the Smoky Mountains in the late 1700’s. She is currently retired, which gives her more time for volunteer work with her church and with Kentuckians For The Commonwealth (KFTC).

They are accompanied by Austin Hall, who is the lead field representative for our national outreach and organizing efforts.

Yesterday marked the first stop in Boston Mass, and it was a packed day! The team kicked things off with a press conference on the steps of the State House Building and spoke about the importance of Sen. Brown taking a leadership role and co-sponsoring the senate bill.

Check out a video from the press conference:

They also were interviewed on WMBR radio. Listen to the hour long program here.

This morning they traveled to Maine and will be giving presentations in Portland, Danforth, and Belfast. For up to the minute coverage, follow our tour on twitter #apptours and @AppVoices.

And check back here for more updates from the field!