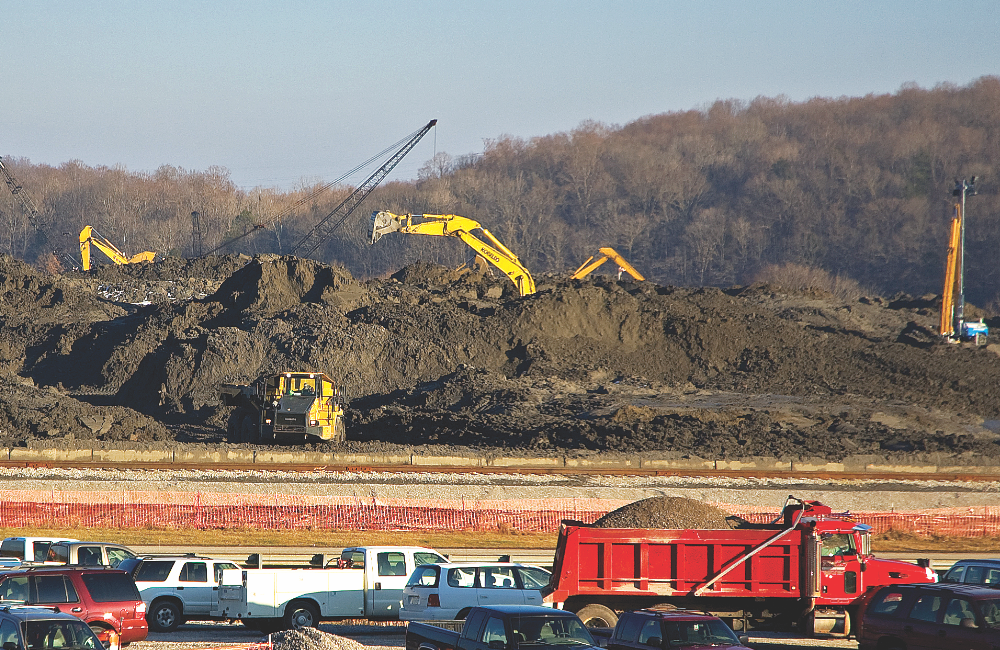 Mountains of coal ash still tower over Swan Pond Road near the Kingston Fossil Plant, the site of the 2008 coal ash disaster. Photo by Steve Scarborough

Over a year after the Dec. 22, 2008 failure of TVA’s impoundment dam released 5.4 million cubic yards of coal sludge, ash still covers the land and clouds the river. In spite of TVA officials’ assurance that the cleanup would last three months and the waste was safe, studies and reports of health concerns suggest otherwise and a final clean up date is years away.

Families Struggle in the Aftermath

By Maureen Halsema
Gary and Pam Topmiller are the last remaining homeowners living in a ghost town on the Emory River.

As they drive to what they once considered their dream home, they pass rows of houses bearing white notices on the doors of recent acquisitions by the Tennessee Valley Authority.

“Just about everybody around here that left has told us the same thing,” Pam Topmiller said. “They left because of the health scare.”

The Topmiller’s home is just across the river from the TVA’s Kingston Fossil Plant, site of the coal ash disaster of Dec. 22, 2008. Early that morning, a tsunami of 5.4 million cubic yards of coal ash hit the Emory River and the once-thriving neighborhood.

In terms of toxins released, it was the largest single environmental disaster in recorded history.

Over the last year, the Topmillers said they have experienced mounting health problems including nosebleeds, chronic headaches, and respiratory complications.

“We got what we call the fly ash flu,” Gary Topmiller said. “We had to go to Nashville to a doctor down there and he said for us to get out of here, but we don’t have any place to go.”

Not far away on Quarry Road, Rev. Peggy Blanchard is raising her great-granddaughter, Julianna, who is five years old. She worries about the potential health impacts related to fly ash.

“We are concerned in terms of exposure to ourselves but we’re mostly concerned about Julianna because not only is this a cumulative thing over a lifetime,” Blanchard said, “but also at her age she’s very much still in the process of neurological development and you don’t want anything that is going to have a negative impact on that.”

According to the Tennessee Department of Health, “If dust suppression measures should fail and particulate matter is present in concentrations greater than National Ambient Air Quality Standards due to the coal ash becoming airborne for periods longer than one day, the department concludes that particulate matter from airborne coal ash could harm people’s health, especially for those persons with pre-existing respiratory or heart conditions.”

“If there is a medical concern, they are welcome to go to the claims office and file a claim,” said Barbara Martocci, a TVA spokesperson. 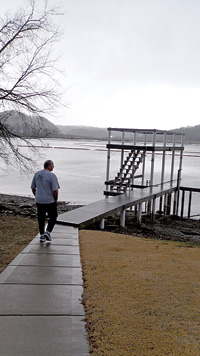 Gary Topmiller walks to the dock of his former dream home where the waters have been contaminated by toxic pollutants from the coal ash spill. Photo by Maureen Halsema.

Steve Scarborough, chairman of the Conservation Commission, a section of the Tennessee Department of Environment and Conservation, has property out on Swan Harbor. Real estate was Scarborough’s investment plan for his family, and now he cannot withdraw the funds from his investments.

“When you sell your property to TVA, they give you a price on the property and they also have you sign a medical waiver,” Scarborough said. “You are required to sign the waiver saying that you cannot sue them for any medical effects. It’s an onerous piece of paper to have to sign. If it were me presenting this to folks, I couldn’t do it in good conscience.”

“They sign a waiver about not coming back against TVA once they get paid for the property,” Martocci said.
The Topmillers also want to sell their house to TVA, but they don’t like the strings attached to TVA’s offer either.

“If you sign that paper, TVA is no longer liable for anything in the future, like if you come up with cancer, they are not liable,” said Pam Topmiller. “That is what you sign off on and that is what we would not sign.”

The Topmillers’ neighbor, Glenn Daugherty, has a 1.25 acre lakefront lot. Since the spill, Daugherty said he has experienced nosebleeds, watery eyes, and chronic sinus issues.

Daugherty said that TVA told him they were going to make him another offer after he declined their $140,000 offer for his lot. “I just wanted fair market value for it,” Daugherty said. “I have yet to get that offer.”

“TVA is trying to say the housing market was down already, you can’t try to recoup your loss at our expense,” Blanchard, who purchased her house prior to the spill and would like to take her family away from the disaster site, said. “Excuse me, there is a big difference between having a decline in value and having a crash in value, which is what has happened to us. Who would buy our property? I don’t know, would you buy property, even after all these years, where Love Canal was?”

How does TVA determine if residents are affected by the coal ash spill?

“It is people who could be bothered by the noise, by the equipment, by the spill itself, the water surge, the ash, and the truck traffic,” said Martocci. “If they are affected, those pieces of equipment are touching them or around them or causing them so much disturbance that they cannot sleep or do their work. That is the sort of thing that they look at.”

Blanchard and Scarborough both said TVA told them that their properties were outside the affected area of the spill and they would not be compensated.

“You don’t tell somebody if they are affected, you ask them,” said Blanchard. “And yes, we are definitely affected.”

Blanchard lives by the quarry, where at the height of the cleanup she reports having up to 800 gravel truck trips passing by her home each day.

Rogers Group Inc., increased the volume of extraction from the Roane County Quarry near Blanchard’s home in order to obtain materials TVA needed to build the weirs and dike in the river to keep the sediments contained in the disaster site.

“My property was on the market when this disaster occurred,” Scarborough said. “Since then we have had one offer of pennies on the dollar of the appraised value. It is unsellable because of TVA, but they tell me I’m not affected.”

The cleanup effort still has a long way to go.

Federal officials have presented three cleanup plans to the public for review in a document called “Engineering Evaluation/Cost Analysis.”

Over 560 plaintiffs are represented in 57 lawsuits against TVA over the December 2008 failure of a coal ash impoundment dam. In April 2009, TVA asked a federal judge to dismiss all the cases, citing a Department of Justice ruling that protects federal agencies from civil suits by citizens. A decision has yet to be made on this request.

“Our primary concern is the health impact of this massive release of toxic materials into our community,” said Levi Giltnane, a Kingston resident who owns both property near the plant and a small real estate business.

“We have a two-year-old daughter, Skylar. For her and for the other children in this area, we want the TVA to give us honest answers about what is in this toxic ash and we want the TVA to fund medical testing for our family and other families who have been exposed to the massive amounts of toxic materials the TVA has dumped in our community.”

In December, nearly one year after the spill, the Environmental Integrity Project (EIP) sent a letter to the White House, asking that President Obama and the Department of Justice to take measures to hold TVA accountable.

“TVA raises issues of federal ‘sovereign immunity’ to avoid penalties in environmental enforcement cases filed by citizens in federal court, yet TVA does not receive federal funds or tax dollars drawn from the U.S. Treasury,” said EIP in their report.

The letter, as well as an in-depth report completed by EIP, states EIP also calls for much more rigorous environmental oversight of the utility, and the elimination of federal protections that allow TVA to keep the grid in a non-competitive lock down.

According to EIP’s letter, “removing these special protections would make TVA more competitive, result in a more energy-efficient grid, and create incentives for TVA to stay ahead of changing environmental and energy regulations.”