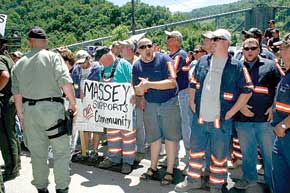 Miners and workers for Massey Energy counter a protest at Marsh Fork Elementary School in West Virgina. One counter-demostrator was arrested for slapping a local environmentalist. Photo by Jamie Goodman

A summer of discontent is rapidly turning into an autumn of confrontation, as Congressional hearings and regional protests increasingly pit environmental activists against coal industry employees.

In one of over a dozen full scale protests this spring and summer, scientist James Hansen and actress Daryl Hannah were arrested in a protest at Marsh Fork elementary school in June. The arrests took place amid a swirl of abusive and threatening commentary from coal miners, and one counter-demonstrator was arrested after she struck Goldman environmental prize winner Judy Bonds.

A few days later, spectators swamped the first formal Congressional hearing on mountaintop removal mining. Testifying that MTR contaminated water so badly that it was impossible to live near the mines. Others testified to “immense and irreversible damage” being done to West Virginia.

Margaret Palmer of the U. of Md also testified: “There is no evidence to date that mitigation actions can compensate for the lost natural resources and ecological functions of the headwater streams that are buried.”

The hearing begins a legislative process to the Clean Water Act to stop the dumping of coal overburden into stream beds. Such a prohibition would effectively stop mountaintop removal mining. Some 155 Congressmen are cosponsoring HR 1310, the Clean Water Protection Act, on the House side, while eight Senators have thus far signed on to cosponsor a companion bill.

A few days after the Congressional hearing, at a family picnic on Kayford Mountain, 20 men and women dressed in coal miners outfits crashed a picnic intending to intimidate environmental advocates. One particularly disturbed man issued a string of direct death threats. A video of the event (“Mountain Madness – Invasion of the coal thugs”) went viral on YouTube in July.

In response, the West Virginia Council of Churches issued a statement warning that “bitter rhetoric and latent violence” needed to be “put aside.”

“We ask leaders to encourage an attitude of understanding toward those with whom one disagrees,” said the Rev. Dennis Sparks, head of the council.

Meanwhile, on the regulatory side, the US EPA will be taking over some water discharge reviews from West Virginia’s state Dept. of Environmental Protection. To highlight the issue, four demonstrators chained themselves to the doors of DEP offices in mid-August, saying the agency was “closed for incompetence.”

Categories: 2009 - Issue 3 (June/July) | Across Appalachia | All Posts | The Appalachian Voice