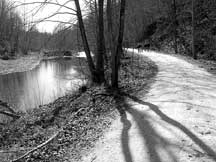 Trains stopped rolling in 1981, and that’s when Popie Martin and her husband, Steve, feared the worst. They had heard the old rail line might be bought by various kinds of clubs. The Martins became especially interested, considering a big chunk of this line rolled within eyesight of their home. “So we bought the right-of-way,” Popie said, “because it was right across our farm.”

That was the mid-1980s. Over the next few years, the couple learned of other successful rail-to-trail projects in Virginia, most notably the New River Trail State Park, linking Pulaski to Galax and Fries in southwest Virginia. They figured they could do the same with this old line.

“It’s just such a logical thing to have these old railroad beds and turn them into trails,” Popie said, smiling. “And this is such a beautiful, easy trail for families. People come every single day and walk every day.”

Dating back to 1915, the Virginia Blue Ridge Railway was used to haul chestnut logs from the Blue Ridge, about the time blight had settled on the fabled tree. Both steam and diesel engines pushed cars on this railway, which claimed to be “The Nation’s Longest Operating Short Line,” passing places called Roses Mill and Woodson.

In 1997, long after the trains stopped running, a volunteer group formed to turn the rail into a trail.
Supported by both Amherst and Nelson counties, this project has received more than $1 million in funding from Transportation Enhancement Act grants from the Virginia Department of Transportation. Another $100,000 has come from the Virginia Department of Conservation and Recreation, while more help has poured in from the fundraising and in-kind volunteer work of the Virginia Blue Ridge Railway Foundation.

Along the way, the Martins won BikeWalk Virginia’s “Community Champion” award in 2005, given for their foresight in buying the railroad right-of-way, donating it to the Virginia Blue Ridge Railway Foundation and then continuing work to make this a trail for everyone.

Originating at the old depot at Piney River, this trail lays easy along the often-flat waters of the river. It is particularly well-groomed, with a smooth surface of white stone dust, suited for strolling, horseback riding or mountain biking. Along the trail, benches are scattered every few hundred yards.

Eventually, Popie said, the old Piney River Depot at the trailhead could be turned into a museum, showcasing both art and history.

There’s a good chance you’ll spy wildlife, like white-tailed deer, great blue heron and red-tailed hawks, hanging out along the path. You can also wet a fishing line where the trail edges close enough to the Piney River to provide public access.

After two miles, the trail reaches reach the old settlement of Roses Mill, another stop with a parking area. From here, the trail continues for about three miles through open fields along the river.

For now, the trail makes a dead end on the farm of the couple that saved the path, but plans call for continuing the trek to eventually reach the Tye River on an already-rebuilt trestle. Continuing to push forward and complete all seven miles of this rail trail is also a possibility for this trail, said Emily Harper, the Director of Recreation for Nelson County.

In recent years, several old bridges have been rebuilt, and Harper hopes to have a new section open by Fall 2009. She’s especially anxious to show the public the big bridge overlooking the confluence of the Piney and Tye rivers. Popie, meanwhile, sounded ever hopeful, saying, “We’re really ready to roll on that last little bit.”