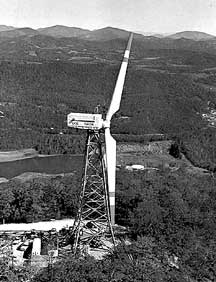 NASA’s MOD-1 experimental windmill was dedicated on Howard’s Knob, in Boone, NC, July 11, 1979. It represented the alternative response to the energy crisis and was one of the first major experiments in commercial scale wind power in the US. It was dismantled in 1983, although it could have been repaired for a fraction of its original cost, partly because of noise and partly because design questions had been answered. A new generation of wind turbines would face upwind, use closed towers and employ a better-balanced sets of three blades instead of two. Photo by NASA, courtesy of The Mountain Times

They said that Boone, NC’s wind turbine didn’t work, that it was too loud, and that, like some kind of gigantic drunk, it attracted wierdos.

Well, two out of three.

Appalachia’s first wind power project, built in 1979, did work – sort of. The $30 million twin bladed NASA turbine did generate two megawatts into the local grid for a while.

When it was dedicated on July 11, 1979, it was hailed as one of the experimental energy technologies that would “break the OPEC stranglehold.”

But it was outdated when it was built, and within a year, its operations would be curtailed on weekends because of an “annoying, swishing noise” that affected people and TV reception.

Historian Natasha Thompson rejected that conclusion in a 2003 paper. “Despite the problems that plagued the project… the Mod-1 project did not deserve its reputation as a complete failure,” Thompson said. “The machine provided scientists with important information on the feasibility of using wind turbines to generate electricity.”

The times they were a’changin’
Boone’s MOD-1 windmill was one of a series of experiments into wind power that were a reaction to the two OPEC oil price shocks of the 1970s.

Originally designed by NASA at the height of the space program using high-tech contractors, four “Mod-O” wind turbines of increasing size were built in Ohio and New Mexico. The Boone MOD-1 windmill was to be the first of an industrial line of turbines.

The MOD-1 design was based on a German design. It had two blades facing downwind and a cross-braced tower which created a large wind ‘shadow’ – a problem that had been noticed on a MOD-0 model but not corrected.
Another problem was that the MOD-1’s blades were made from steel, not the fiberglass composite first envisioned.

A third problem, according to wind historian Darrell M. Dodge, was that the in borrowing the German design, NASA engineers did not notice that a flexible hub was used between the top of the tower and the generator housing called the nacelle. The combination of the three problems created enormous stresses on the machine.

“NASA engineers were astounded by the huge dynamic loads (generated) whenever a blade entered the dead space behind the tower,” Dodge said.

The initial response was to downsize the generator from 2 megawatts to 1.5, which allowed a slowing of the turbine speed from 35 rpm to 23 rpm. The downsizing eliminated most of the noise complaints.

And so, NASA engineers who thought they understood aerodynamics found they had their hands full trying to understand the dynamics of wind machines. The attempt to design a wind machine from the top down had proven far more difficult than expected.

“The views from the Knob were fantastic at the time so it became a sort of lover’s lane,”Freeman said. “We would hike up the mountain, stare in amazement at the gigantic windmill, then watch the sunset on the town of Boone.”

Freeman and Boone native Tony Hagler nearly made a faux-documentary about the adoration that the windmill created. It was to be entitled “Whither the Whooshies?”

“Sadly, in those pre-video days, the costs (of a film) proved beyond my fund-raising abilities,” Freeman said.

But one notable event, Freeman said, was the reaction when Appalachian State University students heard about the arrival of a TV camera crew on the Knob.

“The townies/students moved quickly, donning bedsheets and beads, picking up drums and whatnot, and then racing up the mountain so that when the film crew arrived at the top of the Knob, they found a bunch of freaks sitting around chanting prayers.”

“When the TV people asked them who they were and what they were doing, the locals gave them the straight-faced answer that they were “Whooshies,” and that they worshipped the great windmill god “Nay-zuh” (the windmill had “NASA” written on it) because it “brought energy from the heavens down to the peoples of Earth.”

“With the TV cameras rolling, these Boonenites proceeded to act the perfect fool.” Apparently the TV crew fell for the tale.

The take-down
The immediate reason for dismantling MOD-1 was the failure of 22 bolts in the drive shaft. With repair costs approaching $500,000, the Dept. of Energy decided it would cut its losses and take the windmill down.

But the shift in the nation’s political mood was an even more important factor. With the election of Ronald Reagan, budgets for renewable energy research were slashed and even the solar collectors were taken off the roof of the White House.

The windmill came down in 1983, much to the chagrin of the Whooshies, who lost the object of their worship, but who are still remembered in the bars and blogs of Boone, NC.

A second and third line of MOD turbines followed, and all were dismantled after a few years of operation. The government’s wind research program, by the 1987, had crested $427 million at a time when commercial wind farms were already under development in California and Europe.

The MOD program was one of the most spectacular research failures in history, wrote Paul Gipe in the 1995 book, Wind Energy Comes of Age. Research in Germany and the US was channeled through large corporations and approached on a theoretical basis, with almost no guidance from practical experience.

In contrast, Danish windmills, which now dominate the world wind energy industry, were developed from small, reliable crafts techniques that were gradually scaled up, Gipe said.

Historian Matthias Heymann reached a similar conclusion, calling the top-down research program an example of “technological hubris” in a 1998 article in “Technology and Culture.”

In the end, the Howard’s Knob wind project not only helped the country learn about wind power, but also taught a valuable lesson about the need to integrate ground-up technical know-how with top-down theory.