Mountain Monday: Moving on from Mountaintop Removal (the good news)

There have been some remarkable happenings in the last two weeks in the fight against mountaintop removal. 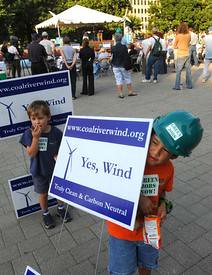 For the first time EVER, both major Presidential candidates are publicly against mountaintop removal coal-mining. Last week at a town hall meeting in Orlando, Florida Senator McCain re-iterated what he told Appalachian Voices back in February. When asked if he supported a ban on mountaintop removal mining, the Senator bluntly said “I do.” McCain raised the ire of many of the more anti-environmental members of his caucus, including WV-02 Representative Shelly Moore Capito. McCain’s response “caught me off guard,” and said “such a stance could hurt McCain in West Virginia.”

We have to find more environmentally sound ways of mining coal, than simply blowing the tops off mountains.

In another HUGE testamant to the success of the national netroots and the barrage of regional activism and citizen lobbying, the Clean Water Protection Act (HR 2169), just hit 150 co-sponsors last week. That is 150 people from 30 states, 1 territory, and the District of Columbia. This legislation is now supported by 142 Democrats and 8 Republicans from Maine to Hawaii to Florida to Washington state, and that list is growing every week. See if your Representative is a co-sponsor of the Clean Water Protection Act (HR 2169).

In an important development in the fight for Coal River Mountain, local activists have proved that we could provide more jobs and more energy by using Coal River Mountain for industrial wind energy rather than turning it into a mountaintop removal site. Due to overwhelming public pressure, blasting was averted last week, and citizens are working with state and local officials to deliver sustainable solutions in the heart of coal country. Please drop Governor Manchin a line and let him know you support the efforts to put clean energy on Coal River Mountain instead of turning it into a mountaintop removal site.

Also, for the first time to my knowledge, a court ruled that global warming bore a higher cost than the operation of a coal-fired power plant. Six activists who wrote the Prime Minister’s name down the side of a smokestack with the intention of shutting down a coal-fired power plant in the UK had the “lawful excuse” that they were protecting the planet from global warming.

Jurors accepted defence arguments that the six had a “lawful excuse” to damage property at Kingsnorth power station in Kent to prevent even greater damage caused by climate change. The defence of “lawful excuse” under the Criminal Damage Act 1971 allows damage to be caused to property to prevent even greater damage – such as breaking down the door of a burning house to tackle a fire.

Actions for this week:
1) Ask your Representative to join 152 members of Congress and co-sponsor the Clean Water Protection Act (HR 2169), to protect America’s headwaters from mountaintop removal mining waste.

2) Ask Governor Manchin to support clean, green, renewable wind energy on Coal River Mountain. With wind we can create more energy and more jobs than is possible with mountaintop removal.

There, wasn’t that easy!? Y’all have a great Monday 🙂

Thats all for this week!