By Josh Tulkin, Chesapeake Climate Action Network
Last night in St. Paul, VA — ground zero for Dominion Virginia Power’s proposed Wise County coal plant — over 100 citizens raised their voices to question members of the Department of Environmental Quality. Residents raised a variety of concerns. The hearing was organized for DEQ to get input on their ‘draft permit.’ Well, input they got. And a lot of it! 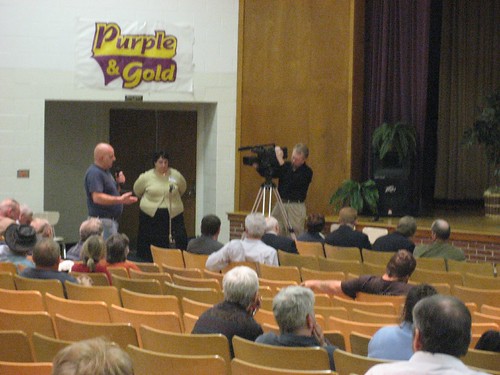 The meeting started with a short technical presentation from the head of DEQ for SW Virginia. In essence, he explained how DEQ felt that the plant was going to be “clean coal” and that is met all requirements. Honestly, it was pretty boring, and everyone was eager for the Q&A.

Kathy Selvage from the Southern Appalachian Mountain Stewards kicked off the Q&A by asking about mercury.
How much mercury will the plant emit?Just over 70 pounds a year, but don’t worry, its all “within regulation”.
But don’t 1 in 6 women of childbearing age have unsafe levels of mercury in their blood? Don’t worry, it’s within regulation.
Kathy pointed out that just 1/70th of a teaspoon can contaminate a 25 acre lake. “We’re doing the best we can”

A minister from a neighboring community grew quite emotional when he asked why they chose to build the power plant less than a mile from the local elementary school. “Our modeling shows that all the of pollution will be at ‘protective limits’. They kept using this term ‘protective limits. Personally, I think NO POLLUTION is the most protective limit.

Tom Cormons from Appalachian Voices echoed concerns raised by the National Forest Service about the plants impact on Linville Gorge Wilderness in the Pisgah National Forest. People at the hearing ranged from high profile names like the local celebrity Frank Taylor who repeatedly asked about pollution levels and the cumulative effects of the multiple power plants upwind from St. Paul, to concerned parents who have children attending St. Paul schools (the schools are all less than a mile away from the construction site).

While the DEQ had plenty of specific answers when it came to the amount of pollutants the power plant would emit, they maintained that they could not comment on the effects they might have. According to EPA data, the CARBO coal-fired power plant, also located in St. Paul, is responsible for 59 premature deaths each year. How many will occur from the proposed plant? DEQ couldn’t say.

A resident who lives right off the main road asked about pollution from transportation. Dominion estimates that the plant will require six hundred diesel coal trucks a day to feed coal for the plant. Will it lead to more mountaintop removal coal mining? More smog? DEQ couldn’t say.

In fact, the DEQ maintained throughout the question and answer period, that their realm of study only pertains to how the pollutants of this plant would relate to the legal limits of pollutants. Basically, the DEQ claims that it is beyond their ability to do anything about the plant’s potential This inability to give a straight answer on so many important issues seemed to only cause the local citizens to want to ask more, harder hitting questions. In the end, only two or three defenses of the coal industry were voiced by attendants.

Before the DEQ briefing, Matt Wasson of Appalachian Voices held a “community briefing” to give citizens a chance to hear another side of the story. Word of our presentation was spread through talking to folks who came to the earlier DEQ question and answer period, and through the efforts of Kayti Wingfield from Sierra Club and myself hitting the town, going from business to business to reach out the locals, and we were surprised to hear so many residents concerned about the power plant. About thirty people showed up to the basement of St Therese Catholic Church around the corner from the elementary school.

As folks gathered and got settled, free pizza and soda in hand, it was obvious that these families were excited to learn more. Matt’s presentation used images of the existing power plant in Russell County, mountaintop removal in Wise, and Google earth imaging to paint the picture of exactly what the Coal industry has done and will continue to do to south west Virginia if allowed to continue with plans to build this power plant. It showed that Wise County is the second most heavily strip mined county in all of Appalachia with 25% of the land being destroyed. It showed that unemployment, poverty, suicide rates, and the number of disabled citizen’s all correlate directly with mountaintop removal mining. It showed that there is not much coal left in SW Virginia, and how this plant would require much more mountaintop removal.

The picture of what will come should this power plant be built is clear, and is damn ugly. Those who came and saw the presentation wanted more to do, and some were ready to come to the SCC hearing in Richmond on January 8th.