Jamie is an Appalachian native with a deep and unshakeable love of the mountains her family has called home since the mid-1700s. With a background in journalism and communications, she has worked as AV's Senior Communications Coordinator since 2008, and served as editor (2008-2016) and consulting editor (2016-present) for The Appalachian Voice. We’re delighted to welcome two new members to the Appalachian Voices family! Adam Wells will be serving as our Economic Diversification Campaign Coordinator in southwest Virginia, where his roots reach back six generations. Amy Kelly, who traces her roots in the Volunteer state back to the 18th century, will work with local residents to grow energy efficiency programs as our Tennessee Energy Savings Outreach Coordinator. [ More ]

It's official --- Appalachian Voices is partnering with one of the premiere music and arts festivals in the country to spread some serious love for mountains! This year, we were chosen to be Floydfest's featured nonprofit, and together we're cooking up some fun and exciting ways to promote stewardship of the Appalachian mountains during the 5-day extravaganza. [ More ]

HBO’s “Saving My Tomorrow” to feature footage from Appalachian Voices This coming Monday, HBO will premiere an entirely new documentary series that celebrates the children who will inherit the planet and their appreciation of the wonders of the natural world. A lyrical mix of science, animation, and music, "Saving My Tomorrow" is a call from kids to kids to help take care of the planet. [ More ] We are delighted to announce that all the great content found in the print edition of our beloved bi-monthly publication, The Appalachian Voice, is now available on our website, through our newly revamped online presence. Before diving in to read the latest issue of The Voice online, take a moment to learn about the new features you'll find inside. [ More ] Appalachian Voices was among a handful of entities invited by Google to provide maps for the Maps Gallery, which launched today. Our offerings include a map that shows how families in the Southeast pay a higher percentage of their income for electricity compared to the national average, one that shows average poverty rate by electric utility territory, and six maps that highlight the connection between mountaintop removal coal mining and poverty and health issues. In conjunction with the Maps Gallery launch, we also released a new report explaining in detail the data we pulled from to create the maps. [ More ] Early Tuesday morning there was a significant slurry spill at Patriot Coals Kanawah Eagle operation. Over 100,000 gallons of toxic coal slurry spilled into Fields Creek near Charleston, WV. Members of the Appalachian Water Watch team were at the site to investigate. [ More ] 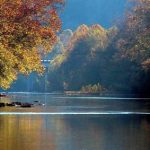 A budget amendment has been introduced in the Virginia General Assembly requesting an initial $2.5 million for the development of a new state park in the Clinch River area. But legislators need to hear from residents TODAY (Feb. 11) that a new Click River State Park will create positive economic development in our beautiful region. Take Action NOW! [ More ]

Lost on the Road to Oblivion: Art Exhibit Focuses on the Vanishing Beauty of Coal Country For the past 18 years, photographer Carl Galie has devoted his artistic talents to conservation work, and his latest exhibit is no exception. "Lost on the Road To Oblivion: The Vanishing Beauty of Coal Country," tackles the difficult and poignant subject of mountaintop removal coal mining in Appalachia. The exhibit is on display at Appalachian State University's Turchin Center for the Visual Arts through Feb. 7, 2014. [ More ] While it’s no shock to those of us who live in the region, the facts are now out that the coal-hungry states of the grand old Southeast are among the worst for air pollution caused by coal-fired power plants.

Just yesterday, the Natural Resources Defense Council released a special report called the “Toxic 20,” a comprehensive look at the twenty most polluted states in the nation due to coal pollution.

Unsurprisingly, ALL TEN of the Central and Southern Appalachian states (as defined by the Appalachian Regional Commission) made the list, including Kentucky, North Carolina, Georgia, Tennessee, Virginia, South Carolina, West Virginia, Ohio, Pennsylvania and Alabama.

Other Southern states include Mississippi, Missouri, Texas, Maryland and even good old Florida (although according to BBQ lore they may not actually be a Southern state).

Without further adieu, we present:

A Long Journey Across Water: Appalachian Coal Exports on the Rise, Study Says A fair percentage of mountaintop removal-mined Appalachian coal is apparently not staying in Appalachia. Nor the Southeast. Nor even the U.S.

As a Chinese fortune I once saw said, it’s heading for a long voyage across the great water.

According to a report prepared by the Democratic staff of the Natural Resources Committee and Rep. Ed Markey (D-Mass), exports of mountaintop removal mined coal in Appalachia have exploded in the past few years, with more than 97 mountaintop removal mines in Appalachia collectively exporting 27 percent of their production in 2011 — more than doubling the export percentage from 2008.

The coal is apparently heading for places like Russia, South America, China and India.

Other highlights of the report include:

The report, entitled “Our Pain, Their Gain,” seems to point to the fact that Appalachian communities, and even Appalachian miners (see Ken Ward’s post titled “Strip miners face serious black lung risks”) are being sacrificed for profit from overseas sales. But the coal industry wouldn’t think of doing that, now would it?

Sadly, I think it already is. A few weeks ago, Appalachian Voices was on the happy end of a rousing night of rowdy rock and roll and vintage and alt country, thanks to the generous hearts of a few North Carolina musicians.