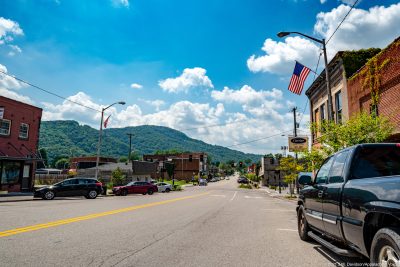 Big Stone Gap is one of the communities that could benefit from proper implementation of the Reenergize Southwest Final Report. Photo by Jimmy Davidson

Economic development in Southwest Virginia could get a long overdue jumpstart with the suggestions Virginia Energy outlined in its Reenergize Southwest Final Report. The report, which was released in December 2021, makes recommendations for the General Assembly to support the economic transition in the coalfields after eliminating the state’s coal tax credits in 2021.

Though the tax credits were put to some good use in Southwest Virginia, an independent study found overall that they resulted in economic losses rather than gains. The General Assembly tasked Virginia Energy, formerly the Department of Mines, Minerals and Energy, with hosting a stakeholder process and recommending concrete actions the legislative branch could take to help the regional economy catch up with the rest of the state.

The report is refreshing because of the deep collaboration with regional partners, including the Virginia Coalfield Economic Development Authority, the LENOWISCO and Cumberland Plateau Planning Districts, and other regional stakeholders — and because it seeks to offer “a new, holistic vision” that will provide vital resources for the many needs of communities, workers and families in the region. 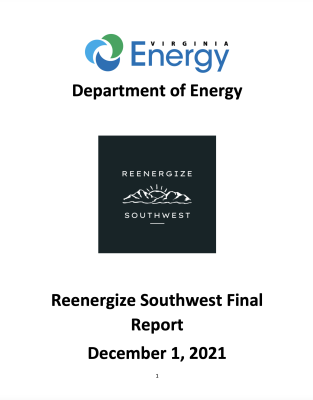 The Reenergize Southwest Final Report makes recommendations for the Virginia General Assembly to support economic transition in the coalfields.

Virginia Energy recommends that the General Assembly invest in quality of life issues like education, housing, community development and childcare. Put simply, building a sustainable workforce requires investments in building thriving communities. The question now is whether the General Assembly will listen to the report it mandated or if it will leave the far corner of the commonwealth out of the new economy.

The report outlines four recommendations: One, ensure the region has access to the commonwealth’s site development fund, a statewide program to prepare market-ready locations for new business. Two, expand existing solar energy programs in the region. Three, support the growth of higher education in the region. And four, establish an inter-agency task force to review seven priority proposals.

With a big spotlight on the coalfields and Southwest VIrginia, the General Assembly now has the Reenergize Southwest Final Report to guide a budget-making session with a $3.5 billion surplus. Additionally, massive federal investments including Abandoned Mine Lands Program and Appalachia Regional Commission funding will be available to state agencies to administer to the coalfields.

The availability of these funds and the challenge of developing a holistic approach to redevelopment makes the report’s recommendation for an inter-agency task force all the more important as the state and the nation shift to a clean energy economy.

Virginians, ask your state legislators to fund economic development in communities impacted by coal! Send them a quick letter here.

Appalachian Voices is working with Del. Sally Hudson, D-57, and Sen. Creigh Deeds, D-25, on a budget amendment to establish the Coalfield Inter-agency Task Force under the direction of the Secretary of Commerce and Trade. This task force will be essential for deep collaboration and a true whole-of-government approach.

The General Assembly should establish and staff this task force so that it has the capacity to tackle the complex challenges facing the region. Additionally, Hudson’s and Deeds’ amendments would provide two new employees at the Department of Housing and Community Development to coordinate the work of the task force and provide extra grant and economic development capacity. DHCD plays a critical role in revitalizing downtowns, addressing infrastructure improvements, building entrepreneurial and small business ecosystems and creating affordable housing.

DHCD would utilize this new capacity to support local planning districts that work closely with localities applying for grants and that help drive innovative development like the energy storage and lab projects. It’s a well-known fact that economic development starts at the local level and is most successful when local leaders have access to strategic planning resources and involve cross-sector partnerships.

What will it take to reenergize Southwest Virginia? Local leaders and citizens have used the resources available to them to shift the economy slowly. More capacity is needed to make sure the region maximizes federal and state funding and puts it to the most effective use. All that’s missing is the political will from the General Assembly and the new executive branch.

Voters in Southwest Virginia and rural parts of the state delivered a clear mandate: It’s time for us to be included in the conversation and receive our fair share of the benefits of Virginia’s economic future. Luckily, the Reenergize report provides a few clear first steps for the General Assembly and Hudson’s and Deeds’ budget amendments will fund this work.