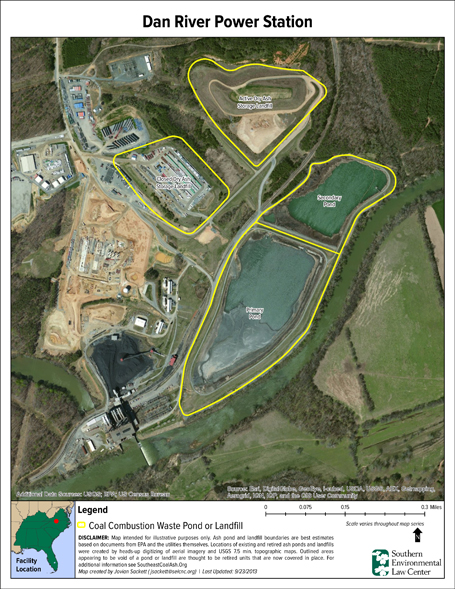 As we all know, coal ash isn’t a pretty thing. The harmful leftovers from burning coal contain toxic contaminants like chromium and arsenic, and seep into our waterways, threatening wildlife and human health all in one fell swoop.

Current testing at the Dan River Steam Station, according to the new website southeastcoalash.org, reveals levels of antimony, arsenic, iron, manganese, sulfate and total dissolved solids above state groundwater standards. That’s unacceptable — coal ash shouldn’t interfere at all with groundwater, surface water, or the waters we drink and play in. To keep coal ash at bay, the ponds of sludge located at Dan River and other sites should be properly lined and covered.

But that won’t remove all of the danger. Dan River has two coal ash ponds, both of which have EPA hazard ratings of “High,” meaning that a failure of these dams would likely cause loss of human life. If the Kingston spill in Tennessee (whose four-year anniversary we’ll observe on Dec. 21) showed us anything, it’s that we can’t take coal ash lightly. The Kingston spill released more than a billion gallons of coal ash into the Clinch and Emory Rivers, and will cost $1.2 billion to clean up. Worst of all, as a federal judge decreed, the whole thing could’ve been avoided had the coal ash ponds been properly regulated.

The public needs to know about the immense risk that coal ash poses, and they need to voice their opinions to state and federal environmental agencies about coal ash. This is especially important now, as it’s reported that Obama may soften proposed coal ash regulations to better comply with the coal industries.

For you, the Appalachian Voices blog-lover at home, you can start off your mission by taking the Red, White and Water Pledge to keep informed about your right to clean water in wonderful waterways such as Dan River.

(And be sure to get involved, if you’re a local, with the Dan River Basin Association!)